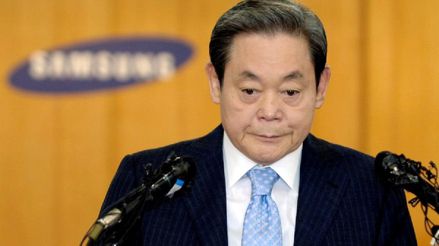 The group Samsung, the largest business conglomerate in South Korea, today announced the death of its president at the age of 78, Lee Kun-hee, the richest man in the country who has been admitted to a Seoul hospital since 2014 because of a heart attack that left him disabled.

Samsung said in a statement that Lee “He passed away on October 25 accompanied by his family, including Vice President (group) Jay Y. Lee”, known as Lee Jae-yong and who, as heir to the empire led by his father, is in charge of conglomerate since then his father had been bedridden for more than six years.

Lee Kun-hee, third son of the founder of Samsung, Lee Byung-chul, was the biggest fortune of South Korea with a network estimated at more than 20 billion dollars (about 16.86 billion euros), according to Forbes, and it was the man who transformed the conglomerate into a multinational entity with the technology giant Samsung Electronics in front.

He was born in 1942 in Uiryeong County, South Gyeongsang Province (southeast of the country), and assumed the presidency of the group in 1987 after the death of his father.

From 1993, he decided to change the direction of the business to internationalize it and turned Samsung Electronics the world’s largest producer of memory chips and one of the most recognized consumer electronics brands.

It is calculated by itself Samsung Electronics today generates about 20% of the gross domestic product (GDP) of South Korea.

After suffering a heart attack in May 2014, he was urgently admitted to the prestigious Samsung Medical Center in southern Seoul, where he remained until his death amid continuing conjectures about his health.

After his death, his son is expected to Lee Jae-yong officially adopts the position of president of the group and Samsung Electronics.

Lee Jae-yong He currently faces two trials for alleged corruption practices, including his involvement in the so-called South Korean conspiracy “Rasputina”, which led to the ouster of the then South Korean president in 2017, Geun-hye Park, sentenced to 32 years in prison.

(With information from EFE)