Minedu asks Congress to reject the replacement of 14,000 temporary teachers 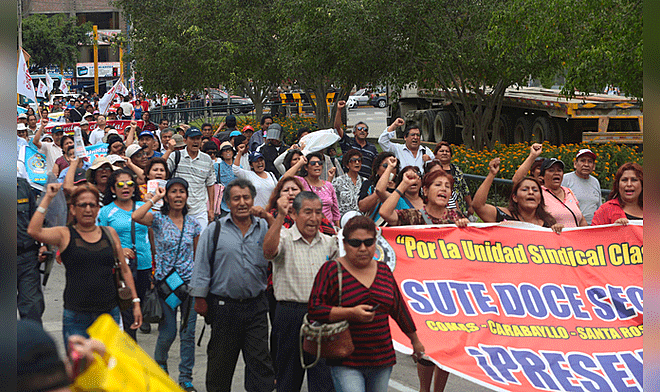 The Congressional Education, Youth and Sport Committee will debate two controversial initiatives that have already received the rejection of the Ministry of Education (Minedu).

The first proposal, promoted by Fujimoristas and Apristas, seeks the replacement of 14,317 temporary teachers, who were removed from the educational service because, according to Minedu, they did not accredit professional or pedagogical diplomas.

The "trainees" figure was created during the Teachers' Law (1984) and sought people to teach without professional title, in the absence of educational demand in remote areas, borders, high Andean and Amazonian. So in 2012, the Teacher Reform Act established two years as the deadline for these teachers to regularize their situation and present their degree.

In November 2014, an exceptional evaluation was called for the 14 863 trainees at the national level. Of the total, 5,315 were registered with professional title and only 546 were approved, entering the teaching career.

"The first is to ensure the quality of education, as we do if we can not even evaluate these teachers?" The second is that it would affect the teachers covered by the reform teachers and meritocracy, "said Education Minister Daniel Alfaro, adding that a possible automatic inclusion, without prior evaluation, would require a reduction of up to 14,000 places for new appointments. .

In that sense, Alfaro Paredes called the congressmen to "vote with responsibility for children's rights and not think about other interests."

Another project that would be debated today is one that allows, exceptionally and only once, that children who completed 3, 4, 5 and 6 years after March 31 can regularize their enrollment in fundamental and fundamental elementary school. There is also the initiative to extend the registration deadline until May 31.

In this regard, the head of Minedu rejected any extension, as well as the regularization of "free" students.

However, according to the General Education Act, we have made admission more flexible by March 31, but there is no possibility of accepting another. more carry out regularizations, "he said.

In addition, he warned that schools that permit the registration of students beyond the date established by Minedu will be sanctioned. (I.e.

"Yes, we have an educational degree"