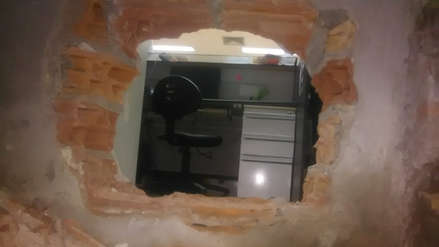 The agency of the Maynas Boxlocated in Iquitos (Loreto), was targeted by criminals who stole more than 1 million and 192,000 soles from the safe.

On Saturday night, agents of the Department of Criminal Investigation of IV Macro Region of the Loreto Police They received the report of theft. The agents arrived at the headquarters of the agency, located at Arequipa Street, 428, in Iquitos, and found inside a wall. According to police, the premises contiguous to a concrete property that had been rented previously.

The National Police reported that the assailants used an oxygen cylinder, a gas balloon, seven metal drilling tools, two combos, two American keys, four and a half pairs of woolen gloves, a pair of leather soldering gloves, a sack with sandpaper, a pair of sandals and a bottle of water.

Faced with this situation, the police presence Forensic Office and the representative of the public ministry for the corresponding procedures of the case. Police personnel from the operational units and subunits proceeded to isolate the surrounding area and roads.

The IV Command Macro Police Loreto Region ordered the execution of various police operations throughout the jurisdiction Iquitos, Nauta and other locations. It was ordered to close access by land, river and air to the possible location and subsequent capture of the alleged perpetrators of the crime.