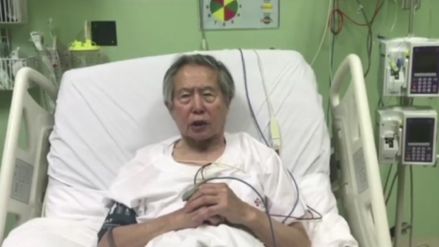 Alberto Fujimori He was attentive, during the last week, to the hearing in which he evaluated the request of 36 months preventive custody against his daughter Keiko. From his bed in the clinic where he was hospitalized, the former president testified to the judge's decision Richard Concepcion Carhuancho.

After 5:00 pm on Wednesday, October 31, the judge Richard Concepción dictated the 3 years of preventive detention requested by the Public Ministry against the leader of the Popular Force. Alberto FujimoriHe was impatient in his bed and made some calls from his cell phone.

The video published by the program End shows the exmandatario linked to a team that monitors their heart rhythms in the intermediate room of the Centennial Japanese Japanese Clinic. Crossing your legs, listen carefully to the magistrate's arguments to accept the promoter's request. José Domingo Pérezwho is investigating Keiko Fujimori and another 10 people for allegedly laundered assets.

Stuck on the cell

In a bit Fujimori He gets up without help from anyone and disconnects the cables from the monitor that measures his wrist. Slowly he goes to the bathroom. Here you can see that there are two nurses who take care of them. One of them reached his cell because he had a call, but the patriarch of Fujimori He looks very busy and does not respond.

O ex-president writes messages on his cell phone after hearing the decision as if he were coordinating some things. Two days later, Alberto Fujimori published a tweet in which he apologized to his daughter for having made her enter the "world of politics".

"My daughter, I am very sorry to have entered the world of politics that has hurt you so much, I apologize for this, I only hope to have the strength and life to see you – as on that day – free with my grandchildren," he wrote.