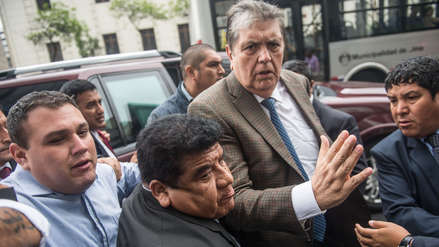 O Judicial branch on Saturday ordered an impediment to leave the country for 18 months against the former president of Peru Alan Garcia for the tax investigation that is followed by the alleged commission of crimes of aggravated collusion and money laundering in a state offense, within the framework of the Odebrecht case.

The judge Juan Carlos Sánchez Balbuena, of the Second Anti-Corruption Preparatory Investigation Tribunal, considered that "there are sufficient elements of condemnation" to declare the action requested by Attorney General José Domingo Pérez to investigate the alleged "illegal acts of conciliation" of the bidding for subway line 1 from Lima to the Brazilian construction company Odebrecht.

It should be mentioned that, according to the research portal IDL Reporters, Odebrecht paid the former president 100,000 dollars for a conference of the secret account with which he paid bribes to several countries of Latin America.

After knowing the judicial decision, Alan García He said that, for him, the order of impediment to leave the country for 18 months is not a sanction. In a message about Twiiter said that it is a time that will pass in his homeland and supporting the "aprismo".

Speaking to the press outside his home, the former president also accused the judicial authorities of offering benefits "to any criminal." to incriminate him without proof. Minutes later, he wrote in a tweet: "But to buy with benefits the declaration of a delinquent in exchange for infamy of me, is a crime that God will punish, today many will believe in it, but then they will repent."

In statements to Channel N He has spoken out against the restrictions imposed by the judiciary in recent weeks, such as the pre-trial detention of members of the Judiciary. Popular Force. "They seem absolutely unnecessary to me because the lawsuits can be carried out in freedom," he said.

"It will only produce an in-depth discussion of circumstances, have early trials without people having the opportunity to present, is not the serious way to approach the issue," he said and urged the authorities to act prudently to avoid "injustice." and deviations from criminal proceedings ".

In response to the Nano Flowers on the judicial decision against Aprima exmandatario, the congressman of the bank of New Peru, Indira Huilca, noted that "excess is what Alan García escaped justice waiting for his crimes to lapse, "alluding to the lawsuit against the former president after his first government (1985-1990) in the 1990s, from which he was spared self-exile.

In this sense, Huilca said that the case Car wash, who investigates irregular offers and presumed tip payments by Odebrecht during García's second term (2006-2011), "should be an opportunity to deeply renew this political class and its" leadership. "

"What exists is a war of a media nature, it became clear that I would not see another result (the impediment of leaving the country) and it will be in the future"

For his part, the APRA congressman Mauricio Mulder He stated in the RPP that in Peru "the rule of law is increasingly regressing" and that the judges. "All they do is agree with what prosecutors ask them."

He pointed out that Garcia "He knew perfectly well" the risk he was facing when returning to the country to respond to a subpoena from the prosecutor in charge of his case, José Domingo Pérez, but who "decided to take over" because he always faces and "never stopped going to any summons of the accusation ".

When asked if the promoter Domingo Pérez elements for a possible application for preventive detention against Alan García, replied: "Absolutely not," but pointed out that from APRA they know that "this is not an issue on which the arguments are valid." "What exists is a war of a media nature, it was clear that I would not see another outcome (the impediment of leaving the country) and that will be in the future," he said.

The parliamentarian of Popular Action, Yonhy Lescano He considered that the injunction to leave the country issued against Alan García is "the least that could be done" in the face of the investigations against him and said that he believes that Justice is finally going after the big shots in cases of corruption in the country.

In dialogue with RPP News, the legislator of the Popular Action He pointed out that there are "serious indications" against the APRA leader, investigated for alleged money laundering and collusion crimes.

"I think now he's seriously investigating Mr. Alan García Pérez. Before, I had a corruption mantle of people attached to your party, like Mr. [ex fiscal de la Nación José] Peláez Bardales, connected to the Aprista party, "commented Yonhy Lescano. "I now believe that the lawsuit goes after the" big shots, "which are the ones that must account for the serious allegations of corruption that have caused so much damage in our country.

The purpose of the request to prevent the country from leaving is to prevent García from evading the process, as he did in 1992, when he went into exile in Colombia and later lived in France.

Suspicions about Alan Garcia in case Odebrecht, they have gained weight since the executive of the Brazilian construction company, Carlos Nostre He told prosecutors that the company paid $ 24 million in bribes for Line 1 of the Lima Metro, of which 14 were directed to senior officials of his government.

The purpose of the request to prevent the country from leaving and prevent Garcia avoid the process, as he did in 1992, when he went into exile in Colombia and then lived in France, until in 2001 it was declared that he had prescribed an indictment for alleged illicit enrichment during his first term.