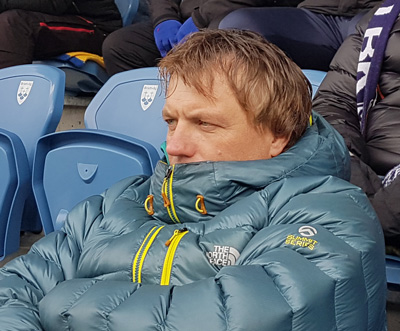 Sean McDermott: 4 points
Solid as usual and take what's to come. It stops a bit for Brann and there are not many finishes on KBK's goal. You can not do much more than take everything.

Bent Sørmo: 4 points
Playing a solid match on the hillside. Striking ball with the ball is coming forward and it is difficult to push it away from the ball. Probably the best selling item on KBK.

Dan Peter Ulvestad: 5 points
King in the air and king on the hill. Fire does not matter much. And score a goal as requested earlier this season. Captain.

Christophe Psyche: 4 points
Solid again, works great with DPU. Good in the air and tough with the ball. There is not much peace to get to Bamba.

Biscuit Christoffer: 5 points
I took very big measures on the defensive during the season. It also contributes a lot to the future as usual, but sometimes there is little room for it to move forward. And the ball is still good, so forget to mention a not too good free kick.

Andreas Hopmark: 5 points
It's great to see Andreas play a lot more on the field, unlike previous games where he was in excess of safety. Clean and lose a little. Scores also targets and then should be fine.

Amiduo Diop: 5 points
The same as Andreas, but even more creative with the ball on his feet. Have a good step so easy to follow. He also scores goals. Next year we expect him and Andreas to score at least 3-4 goals. Sink a little in the goal of Bamba not covering the room that appears behind Aasbak when this one is in attack.

Liridon Kalludra: 4 points
Many good triangle games in the KBK midfield. There is Liri central and its ace. Both run and dribble (and succeed) more this fall than at the start of the season. Exchanging with Aasmundsen in the last quarter

Sondre Sørli: 4 points
Clearly, Sondre has now gained confidence. It works both safer and stronger, although there is still something to be done in terms of strength. He runs a lot, takes good initiative and dares to try.

Torgil Gjertsen: 4 points
It varies a part, but usually occurs in the most difficult situations. A constant urgency that opponents should always pay attention to. It seems to be a player that many of this year's opponents have geared up for. Swap with Bye in the last half hour.

Aliou Coly: 4 points
With Coly at the top, you get real power and speed. It's better like back and middle stops, but it does a more than ok job at the top. Involved in a somewhat unfortunate and unnecessary situation at first, but fortunately went well with everyone involved.

Bendik Bye, Stian Aasmundsen and Henrik Gjesdal Enter what is one of the best games of the year, if not the best. Especially Aasmundsen was very positive and central to the room he played. Bye is still a top scorer while Gjesdal is next year.

Send us messages or tips from the reader

Text, images and videos for reading posts, articles and other tips can be sent to [email protected]
For comments, please use the comments below.