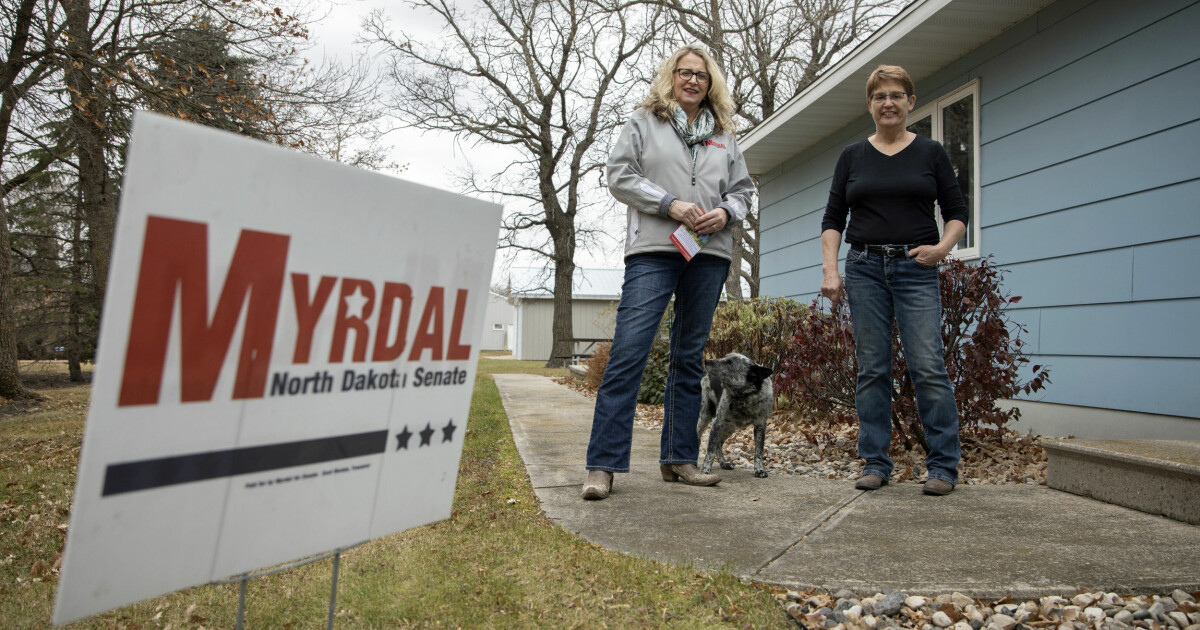 Janne Myrdal (58) jumps out of the truck and picks up a special sign on the loading platform.

On the plaque is her surname in bold red letters and soon she handed the plaque, as well as an electoral brochure, to neighbor Linda Thorsen.

– Did you vote? asks Myrdal.

– Yes, last week, says Thorsen and strokes the plaque so much that Myrdal can safely conclude that it is in front of a genuine supporter.

– Ahh, so I left too late. But is there anything you want to bring to me? Any concerns?

– No, not really, says Thorsen.

– But I’m glad you also live on a farm. It makes me confident that you know the pressure we are under as farmers.

In the Senate election four years ago, Myrdal received 64% of the vote in his home district of North Dakota. Now it aims higher. And the goal is at least 65%.

Despite the fact that voters in her home district seem to have confidence that she runs agricultural policy in a good way, it is resistance to abortion that is the son of Myrdal’s political heart.

And here it may also appear that she has a certain audience among her own – in a 2014 survey, a small majority of North Dakota residents responded that they are against free abortion.

– I hope it is impossible to have an abortion in North Dakota. It may seem cruel, but I think it is not right to take the life of an innocent child, Myrdal said after the door slammed, right at home, outside the farmhouse in Edinburgh, North Dakota.

– Abortion is not good for women. It is obviously not good for the child. And I think that we, as women, are so strong that we can carry a child, no matter what happens to us, she adds.

Myrdal, who left Telemark and Norway in the early 1980s, says he had his political awakening when he worked as a missionary and social worker.

– I worked for years with prostitutes in some of the most congested areas in Texas. I met women who became pregnant in the most frightening circumstances imaginable. And even they regretted having an abortion afterwards. It convinced me that abortion is never the right solution, she says.

In a study by UC San Francisco, published in January this year, 95 percent of a sample of 667 women reported that they did not regret having an abortion, five years after they did it. About this research, Myrdal says the following:

– This study has major methodological deficiencies. Several of the women who were originally with dropped out along the way. In addition, not everyone signed up in the first place. All of this changed the outcome, and several other studies show that most women regret it. I myself have never met a single woman who was happy to have an abortion.

This, in turn, could have consequences for the Roe vs. Wade verdict, which in practice legalized abortion across the United States in 1973.

In recent weeks, Myrdal has closely followed Senate hearings and says he believes Coney Barrett’s nomination may have a lot to say about the fight for abortion.

– I think you can have a lot to say, but it is important to remember that a possible revocation of Roe vs. Wade will not mean that abortion will become illegal. It just means that there is no longer a federal law that legalizes abortion, says Myrdal.

She further emphasizes that the state must be allowed to decide the issue of abortion on its own.

– If California and New York want to legalize abortion in the 30th or 40th week, then they are free to do so, but we in North Dakota will also make decisions on our own, without being rejected by Washington DC

I’m not afraid of the black market

The governor of his home state, Doug Burgum, is a Republican. Myrdal’s party also has a majority in the state senate and therefore takes several steps to make abortion illegal in North Dakota, if there are changes regarding Roe vs. Wade.

– Before Roe v. Wade, there was a big black market for abortions and many women had an unjustifiable abortion. Don’t you fear that there will also be a resurgence of a black market again?

– We can’t control it, but no, I don’t think we have a big black market. In the past, there was a lot of shame associated with becoming pregnant outside of marriage. Now that the shame is gone and it is easier for women and for us, as a large society, to take care of women who ended up in such a situation.

Four years ago, Myrdal told TV 2 that she would cover her nose and vote for Donald Trump during the Republican National Convention in Cleveland, Ohio.

At the time, Ted Cruz was Myrdal’s favorite candidate and she was concerned about Trump’s moral compass as well as his political skills. Now she is much more optimistic about the president, whom she describes as “a fun screw”.

– I keep what I said at the time, but a lot has changed. He kept his promise, which is rare in politics.

Myrdal lists a lot of election promises with a smile on his face.