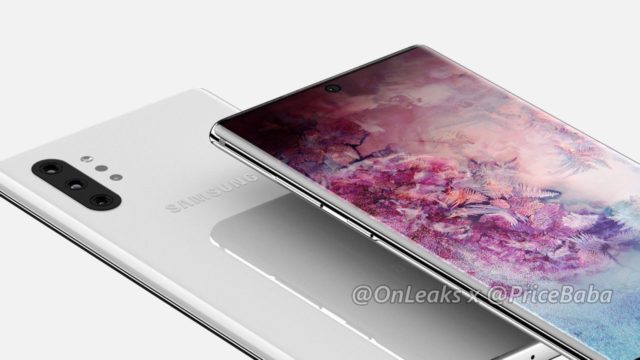 Only the LG G8 ThinQ and the Huawei P30 Pro have the technology for now.

We have high expectations for the Samsung Galaxy Note 10 not only because Samsung showed a lot of exciting technology last year but because their Note phones have always impressed with the specs and features where Samsung usually has an ace up its sleeve.

For the Galaxy Note 10, rumors say that Samsung has put four cameras in the back of the phone, as well as launching a 5G variant with extra performance from a special in-house chip, the Exynos 9825.

Now it can be said that Samsung has also put on the phone a very special sound technology called Sound on Display (SoD) – so far this is found in two other devices: LG's G8 ThinQ and Huaweis P30 Pro. is characterized by the fact that the manufacturer relies on using vibrations on the screen to create sound rather than a loudspeaker that is normally placed on the top of the front.

The rumor is based on images leaked from screen savers to the next smartphone, where there is no "pocket-bus" or something similar at the top, just a hole for the camera, so that the screen extends extremely close to the top frame of the telephone.

Note 10 "Chin" is very narrow, the same level as the iPhone, with no speaker grooves on the forehead, which means that the flagship SoD display technology will replace the traditional speaker. The forehead will be narrower. pic.twitter.com/6aRGQIG0ee

So far, it is rumored that we expect to be confirmed by Samsung when they show their cell phones on August 7 during an "Unpacked" event.

An interesting detail to note is that SoD technology has been used exclusively for phone calls and other specific tasks with a deliberate omission of music and other media. This means that the sound quality may be a bit weaker than that of your competitors, because the phone potentially depends on a less loud speaker.