Equinor's dream giant: – We are prepared to pay for this 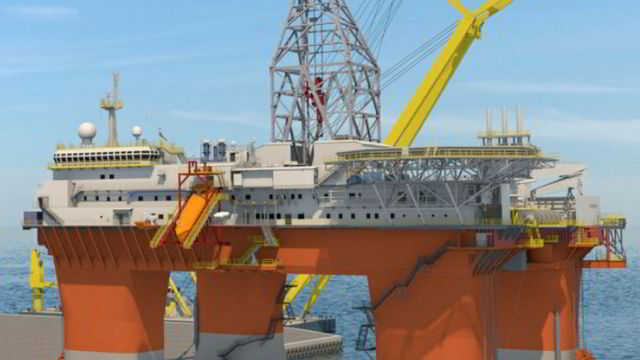 In the Forus headquarters hall, representatives from the entire equipment industry sit down and accompany Equinor's director of efficiency and platform management, completing their long presentation called "Rig for the future." To put it simply, Equinor wants a lightweight dream probe full of robots, with half crew, lower fuel consumption and reduced operating costs by half.

"We are prepared to pay for it," says Equinor top Per Haaland.

He wants non-binding proposals for solutions by August 15. At the other extreme, Equinor attracts long leases.

"We must get the platforms on a contract that is sufficient for them to be carried out. By entering into long contracts, we can disconnect from the market by offering a lower, steady rate for a longer period of time.

It has not exactly been the new platform build that has been at the top of the list in platform companies in the past two years. The oil crisis and bottlenecks in the investment budgets of oil companies have led to many empty drilling rigs in the world, and most drilling companies have faced great difficulties.

– The reason the oil fields are closed is that the cost of new wells exceeds the revenues. If we can drill cheaper wells, we can extend the service life. This is an attempt to rethink the cost of drilling. We also want to get a probe that can power the wells cheaper, says Haaland.

– We challenge the probe companies. Is it possible to drive a probe with 50 men on board? It's a goal to fight for. Sixth generation probes cost up to $ 750 million to build. Equinor will not order these new constructions on the Norwegian platform. They are very expensive. They also use a lot of fuel, he adds.

Haaland thinks the time is now because the robot's technology has gone so far that it is possible to automate many of the processes on board and design the entire equipment accordingly.

Throughout the course, there are a number of program reminders around so-called Cat D equipment, a type of medium-sized equipment that has been specially adapted to Equinor's needs in relatively shallow waters on the Norwegian platform.

It was the Songa probe company that in 2011 won the contract to build and operate these probes in an eight-year contract with options. In 2013, Songa renegotiated the tariff conditions to ensure that the platforms were built. The contracts turned out to be so profitable after the oil crisis that Songa was sold to great profit for Transocean in 2017.

– The Cat D rigs have been designed with technology from 2012 or 2011. They are specially adapted to the depth of water on the Norwegian platform. They are very good in the workplace and have future communication solutions, but drilling and logistics are not automated, "says Haaland.

"We want equipment where no one takes equipment." Must have maximum automation. Machines should move everything. We want robotic cranes and not people on the drilling ground.

He is aware that Equinor will not build a large project organization for the construction of the probe, as was done with the Cat D probes. It was very expensive. How many such platforms Equinor will accept is not clear, but he thinks it rational to build more than one if he starts first.

Do not play with regret

Operations director Kjetil Gjersdal at Odfjell Drilling is among those who left the hall after the presentation of Haaland. All competitors are also in place, for good reason. Equinor is by far the largest customer in this country.

"We find it interesting and exciting." This is something we will seriously consider. It coincides with many thoughts and projects that we already have in progress. So it's too early to be concrete about solutions, says Gjersdal.

While the industry is struggling with overcapacity, Gjersdal believes that the platform companies should keep up.

"There's nothing to complain about. We must relate to what customers and the market want.(Terms)Copyright Dagens Næringsliv AS and / or our suppliers. We would like you to share our cases using the link, which leads directly to our pages. Copying or other forms of use of all or part of the content may only occur after written permission or as permitted by law. For more terms, see here.