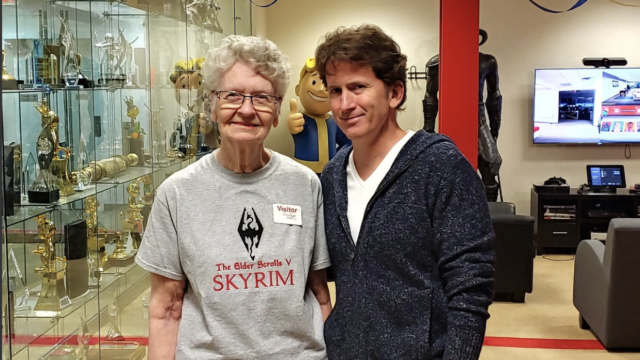 Become a character in the game following Skyrim.

Last year, we wrote a case of "Grandma Shirley" – an 82-year-old grandmother who spent countless hours in the "The Elder Scrolls" universe in recent years and fears she will not experience the continuation of Skyrim due to her age. On her YouTube channel, she publishes Skyrim videos and has captured more than 500,000 signatures.

I made the petition campaign

At that time, fans petitioned that game developers could recreate Shirley as a character in the game. This was the result of her recording of an episode of her Skyrim series, where she speculated she may not be present when the sequel "The Elder Scrolls VI" is released – probably coming to the next generation gaming consoles.

And then for the good news: this week, Shirley announced on Twitter that Bethesda has fulfilled her wish and that Bethesda will include her as a character in the sequel to Skyrim:

Well, since they made the announcement today about me as a character in the next TES game … I can show you my favorite thing I brought with me !!! (I.e. pic.twitter.com/lIoEJ3tz83

Coincidentally, Bethesda has in these days introduced new technologies to recreate content in future games, using the so-called "photogrammetry" technology to recreate real faces in game in a whole new and more realistic way.

The bad news in the middle of all this is that we probably have to wait a bit for Bethesda to launch the next game on The Elder Scrollsseries. Today we wrote that Todd Howard at Bethesda confirmed that neither the Skyrim nor Starfield sequel will appear during this year's E3.