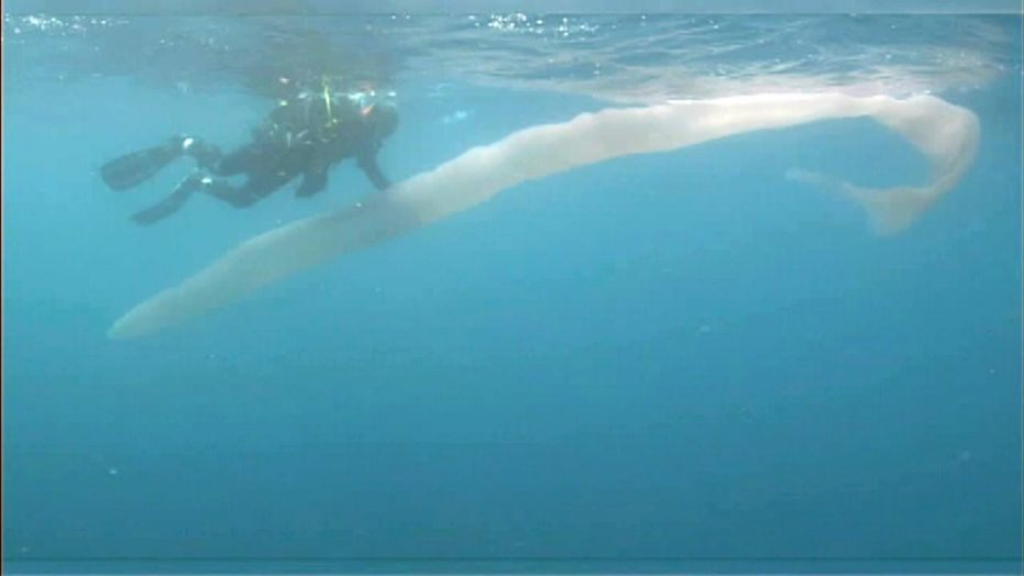 These two divers have been overshadowed by a deep worm that is more than 6 meters long and consists of hundreds of thousands of organisms.

Longtime friends Steve Hathaway, 56, and Andrew Buttle, 48, were diving off the coast of Whakaari, the stratovolcano on White Island, New Zealand, on October 25, when they discovered the gelatinous worm.

Initially diving to record images for the island that Andrew inherited from his grandfather, his focus was stolen by the hollow creature resembling a half-wind.

The worm can be seen moving gently through the water, occasionally shuddering and throbbing as divers swim gently around it to keep from disturbing it.

At a depth of about 32 feet, the organism slowly traveled about 656 feet, assuming many different shapes and sizes.

Andrew, who is a pilot during the day, said: "Having never seen a person, not even footage or photos of one before, I was quite incredulous and elated for such a creature to exist.

"It was very intriguing but also fantastic to be able to see him up close and spend a lot of time with him."

The island is 48 kilometers from the mainland, and there are a lot of fish and nutrients in the water that may have had the right circumstances to become so large.

"I believe it is possibly a Pyrosome – occasionally they get caught in nets, but not many large intact specimens that I know of have been captured.

"Sometimes there may be thousands of small versions of these creatures in many parts of the world, but it's not something I've seen before."

Steve, who founded Young Ocean Explorers, an educational entertainment platform that encourages children to explore the world's oceans, said, "Undoubtedly the highlight of the trip was finding the pyrosome – I wanted to see one for many years now.

"The ocean is such a fascinating and much more fascinating place to explore when you really understand a little of what you see, like different behaviors."

Andrew inherited the active volcanic island of his late grandfather, who was only able to visit his government purchase for half an hour.

To learn more about daily trips to the White Island by sea or helicopter, visit: www.whiteislandnz.com

To support Steve in the education of the next generation of Ocean Explorers, visit: www.youngoceanexplorers.com