Huawei puts focus with the P30 Pro on the cameras. But does the device also meet expectations in other areas?

The Huawei P30 Pro is the latest top device from the Chinese manufacturer. Huawei made a few years ago midrangephones, but now the company is also actively participating in the higher price range. It is nowadays a change when it comes to the company that sells the most smartphones around the world: Apple or Huawei. With the P series, Huawei focuses mainly on lenses and camera sensors.

With the P30 Pro, Huawei also worked on the housing. The design has changed slightly with an OLED screen that is not flatter but tilts into the box on the sides. This makes the phone look more like the Samsung Galaxy S handsets. It takes a while to get accustomed: just like with Samsung phones, sometimes it happens that the palm of the hand accidentally touches something on the side, so that you inadvertently activates something on the screen.

A small notch with a single lens

Also, the phone looks good at the end. A small notch was placed in the front for a single camera at the top. This is not in the way, but it's a shame that Huawei has kept it in a lens. For example, the phone is equipped with facial recognition, but unfortunately it does not use 3D sensors, so it works less well in the dark.

Also, it would not be out of place if a dual camera had been placed in front to distinguish Pro from the normal P30. The Galaxy S10 + from Samsung, for example, has this and therefore also offers a wide angle lens for selfies with groups.

The P30 Pro has a 6.5 inch oil screen. The screen is clear and shows beautiful colors but is not always useful to use due to its size. A fingerprint scanner is placed under the screen, which allows the phone to be unlocked quickly. 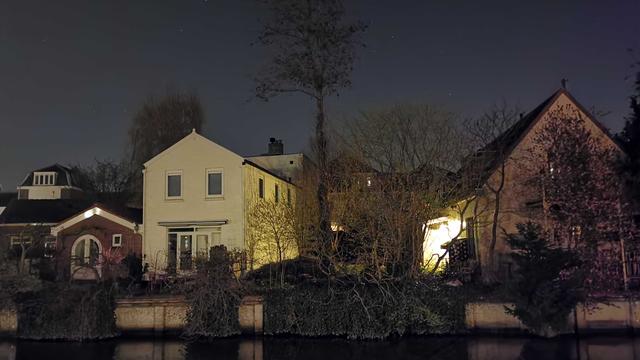 Photo in the dark with P30 Pro

What sets the phone apart from the other major devices in the Android market are the camera lenses on the back. In addition to a standard lens, the P30 Pro is equipped with a wide-angle lens, a zoom lens and the so-called Time of Flight sensor that measures depth. The latter is useful for portraits and for shallow depth of field, for example.

These lenses offer the camera of the smartphone a huge range. For example, you can shoot a large part of the environment with a wide-angle lens, but you can optically approximate an object up to five times without loss of quality. In addition, there is a hybrid zoom of up to ten times, combining optical zoom with software applications, to take even sharper pictures.

The phone can also digitally magnify up to 50 times. This, however, causes a lot of grainy and blurry images. However, the phone stabilizes surprisingly well even from this distance.

Photos in good light appear clear and detailed, but the P30 Pro also performs above average in the dark. The standard camera can take well-lit pictures, even in a dark room. The phone works so well that the camera usually shows the environment more clearly than the human eye can see. In really dark environments, the colors are not always correct, but the results are quite clear and impressive.

From wide-angle lens to 50x zoom in the P30 Pro

The software can be even better

The Huawei P30 Pro works with Android 9. However, Huawei uses its own style, which does not always look so elegant. The phone is also immediately equipped with dozens of applications after installation, which can not be removed. For example, this concerns Huawei's HiCare, a default browser, and the Music application. As an appdrawer is missing, they always remain in a folder on the home screen.

Applications like Bookings and Amazon Shopping are also pre-installed and there are many Google apps available. Not all of them can be removed, so you'll always have apps like Play Films and Play Music.

The P30 Pro is equipped with an excellent Kirin 980 processor from Huawei, making the phone work quickly and smoothly. However, occasionally we had a hard time loading new posts on Twitter and Slack. In addition, the device is equipped with 8GB of memory and 128GB of storage space.

The Huawei has a 4,200 mAh battery, which makes it easy to move around the day. With very intensive use, we still had 30% battery at the end of the day. Charging can be done wirelessly and through a fast charger. It is a mistake that your smartphone does not offer stereo speakers. The sound only comes from the bottom of the phone.

Huawei has set a new standard in smartphone photography with the P30 Pro. The device offers a huge range not only in terms of zooming functions but also in terms of software. In this way, the device knows how to handle images in (very) low light.

In addition, the P30 is a very solid phone with a small mistake here and there. For 999 euros, you get a little less of all the price than the equally expensive Galaxy S10 + from Samsung. But if the camera is the most important part of the smartphone for you, then you can not find anything better than the Huawei P30 Pro at this point.