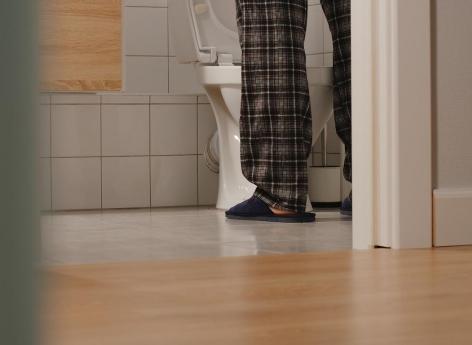 If you are accustomed to getting up several times each night to pee, it may be a good idea to talk to your doctor. In fact, this may be a sign of high blood pressure. This is the case of the Japanese researchers, who presented their findings in theand Annual Meeting of the Japan Traffic Society (JCS 2019) held in Yokohama, Japan.

Also known as nocturia, this frequent need to urinate at night may indicate high blood pressure and / or excess fluid in the body, say study authors.

Nocturia associated with an increased risk of hypertension

Earlier work had already shown that high salt intake could promote nocturia. This new study goes further by looking at the link between this urge to urinate at night and hypertension in the Japanese population, which is used to consume saltier foods than in the West.

To establish this link, the researchers recruited 3,749 Japanese living in the town of Watari, located east of the peninsula. All had an annual health examination in 2017: blood pressure was measured and information on nocturia was obtained through a questionnaire. Participants with blood pressure equal to or greater than 140/90 mmHg or who were taking prescribed antihypertensive medications were considered hypertensive.

In examining the results obtained, the researchers found that nocturia was significantly associated with hypertension. "We found that getting up at night to urinate was linked to a 40% increase in the risk of hypertension," says Dr. Satoshi Konno of the Blood Pressure Division of Tohoku Rosai Hospital in Sendai. "And the more you go to the bathroom, the greater the risk of hypertension." Of the 1,882 participants who answered the questionnaire, 1,295 (69%) were affected by nocturia.

The specialist specifies, however, that these results do not prove the existence of a causal nexus between nocturia and hypertension. They are also specific to the Japanese population. "The relationship can be influenced by many factors, including lifestyle, salt intake, ethnicity and genetics."

According to Barbara Casadei, president of the European Society of Cardiology (ESC), more than one billion people are currently suffering from high blood pressure worldwide. It is the leading cause of premature death with nearly 10 million deaths by 2015. That is why ESC recommends that people with hypertension take medications to reduce the risk of stroke and heart disease. but also a healthier lifestyle, including limited consumption of salt and alcohol, regular physical activity, weight control and smoking cessation.