A few days ago, Google announced the acquisition of Looker, a US company specializing in business intelligence and data analysis for $ 2.6 billion, to provide an end-to-end BI solution. Many tools are available in the data visualization area and Looker offers many benefits to users. These include ease of use, but also a simple modeling language, called LookML, that allows data teams to define relationships between data so that non-technical users can exploit them without the need. Know how to write extremely complex requests.

After Google, it's Salesforce that gets its hands on a business intelligence and data analysis company. The world leader in CRM has just announced the acquisition of Tableau for $ 15.7 billion. This represents a substantial premium to Tableau, compared with its market capitalization of $ 10.8 billion last Friday. So what drives Salesforce to invest so much in BI business and analytics?

In a press release, Salesforce is demonstrating its ambition to provide a data analysis and visualization platform for every service and user in any business. With Customer 360, only Salesforce can provide organizations with a complete and intelligent view of their customers at every point of contact: sales, services, marketing, commerce, and more. Salesforce pioneered AI for CRM with Salesforce Einstein and now delivers IA-based analytics for sales and marketing. With the combination of Tableau and Einstein, Salesforce will provide the most intelligent and intuitive analysis and visualization platform for all services and users of any company. Tableau will further strengthen Customer 360's and Salesforce analytics capabilities than ever and enable the company to reach more customers and end users.

Tableau is the undisputed market leader in the category (data analysis and business intelligence platforms) even if Microsoft comes into force thanks to Power BI. By the way, Microsoft has this year in the Magic Quadrant of Gartner, which ranks companies according to the criteria of the house. 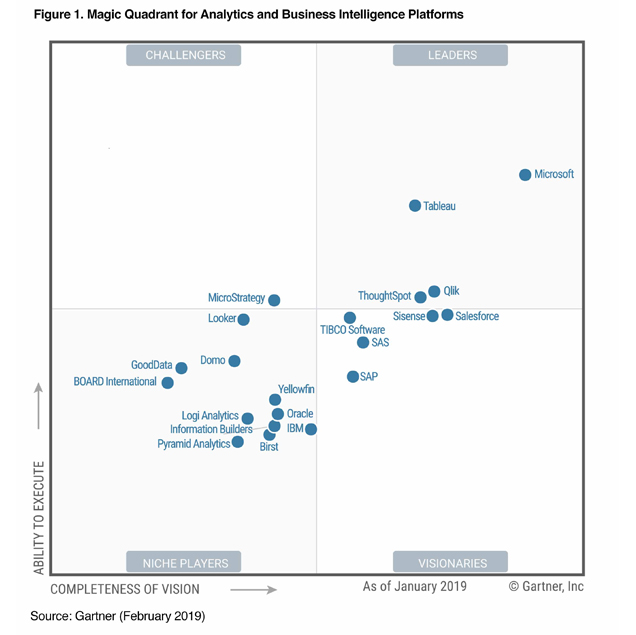 A good integration between Tableau and Salesforce could therefore breathe new life into Tableau, but especially to raise Salesforce to the top of the rankings, which is clearly behind schedule compared to Microsoft and Tableau. The decision to buy Tableau may also come from an interest in improving compatibility between Salesforce and Tableau to provide a more robust service offering that can compete with Microsoft.

Keep in mind that Microsoft has become a formidable competitor of Salesforce over the years. The company of Marc Benioff, if it is world leader in CRM, has the Microsoft kits second. But in the SaaS market, Salesforce has to settle for second place behind the Redmond company. The two companies were also in competition to offer themselves LinkedIn, but the social network of professionals accepted the offer of 26.2 billion Microsoft. In making this acquisition, Microsoft sought to accelerate the growth of its SaaS and CRM offerings Office 365 and Dynamics. Salesforce, therefore, mistakenly identified this defeat, especially as the company was willing to pay more money to offer LinkedIn.

That said, there is always a question: why are companies like Google or Salesforce interested in business intelligence and data analysis platforms? In 2008, there were similar acquisitions of Cogons by IBM and BusinessObjects by SAP. Today, Salesforce gets its hands on Tableau a few days after Google turned its attention to Looker. Microsoft has chosen to develop its own Power BI solution.

87% of companies have low maturity in analytics and business intelligence, according to a Gartner study.

Gartner: Growing market for infrastructure and middleware software in 2017, led by Oracle and Salesforce

Business Intelligence: BI discovery and self-service solutions would be more user-oriented than others

Microsoft is the market leader in SaaS-based enterprise applications in the second quarter of 2017, followed by Salesforce, Adobe, Oracle and SAP