Following the fire that hit Notre-Dame de Paris earlier this week, several billionaires have announced they want to make donations of thousands or even millions of euros. Decisions that have provoked the ire of Pamela Anderson, who has lived in France since 2017.

On Twitter, she criticized: "One billion euros already raised to rebuild Notre Dame." It was easy.Thank you billionaires.And to add, "I thought that the Catholic Church had raised enough money by growing over the beliefs of the poor. »
Before letting go: "And the homeless who run the streets, hungry?"

Pamela Anderson continues, "This is proof that this 1% (of the population, Ed) is above the ground, they could not be less interested in others, just in their name in the newspapers. they will be celebrated, and their gifts will not be taxed and will still benefit them as long as they are considered heroes?

Before concluding, "Life is not fair. It should change." 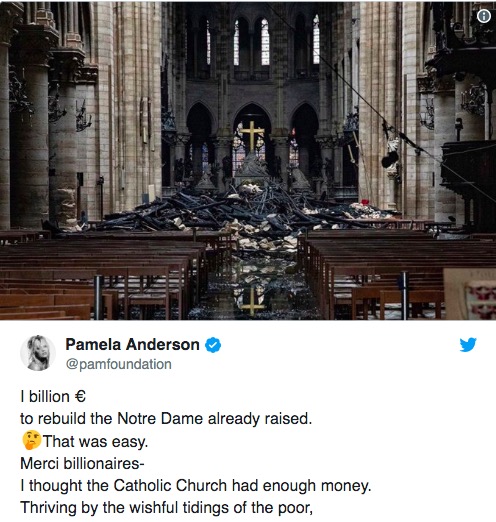