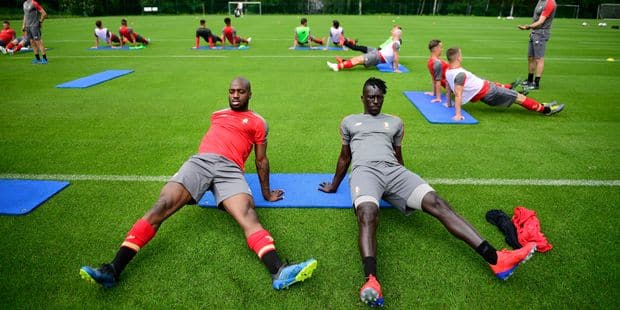 
Uche Agbo was the only foreigner, while PAOK and Standard came into line with the Moroccan Belgo.

They were supposed to be 24 years old (with the defensive Congolese midfielder in the test Peter Mutumosi), but they were finally 22 Rouches for the official resumption Thursday morning on the heights of the Academy.

Expected on Monday, at the same time as the international Laifis and Cimirot, Mergim Vojvoda was present on Thursday for his return to the Academy. Also expected (was reported) in the group by Standard Tuesday, Uche Agbo shone through his absence. The Nigerian told the club that his return was postponed due to a ceremony related to his mother's death, which occurred in October 2018! On loan to Rayo Vallecano, in the second division, Uche Agbo, who has two more years of contract, does not intend to stay in Standard, where he feels he was not respected in his fair value last season. He is now expected on Sunday. Finally, the young Evangelos Patoulidis (exams) was also absent. Mehdi Carcela, meanwhile, spent the day conducting his tests because he returned at the end of the previous day.

In the menu of this first day, a light session on the ground in the morning, before the famous physical tests that were distributed over two days. A field session is scheduled for Saturday morning and there will be two on Sunday.

He was also back at school for Mbaye Leye, who was on the first day of his second coaching career. Always very brave, the Senegalese participated in the physical exercises alongside Luis Pedro Cavanda before returning to the position of deputy for the remainder of the session.

The group of Michel Preud & homme will, over the course of days, grow more. Next Monday, T1 Liège will host Aleksandar Boljevic. Montenegrin had a good medical checkup and on Thursday, bureaucracy was under way.

Next week will also mark the arrival of … Omar El Kaddouri. The 28-year-old Moroccan had already reached an agreement with Standard on the basis of a three-year contract at 1 million euros per season. There was still to be found common ground with PAOK, which was done Thursday during the day. The value of the transfer is around one million euros. El Kaddouri will join the Academy next week.

An academy that Amir Rrahmani will never know. As we mentioned in our Wednesday and Thursday editions, Kosovo has rejected a contract offer from the Rouches (€ 150,000 difference between supply and demand) and the defender will finally get involved with Hellas Verona. Finally, striker George Puscas is good at small roles, but the Romanian striker is expensive and the competition is fierce.