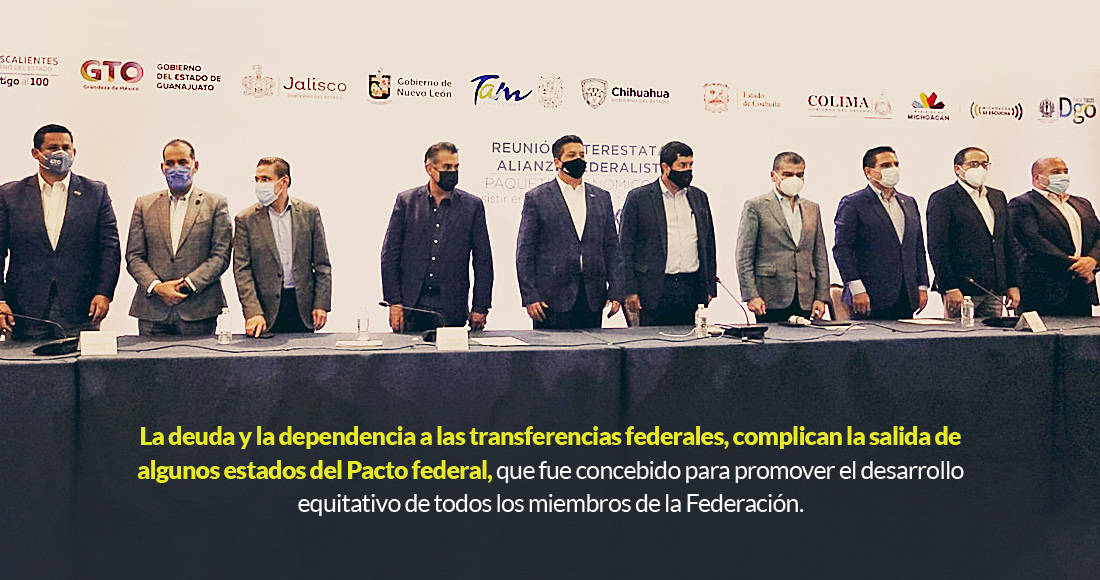 First he was the governor of Jalisco and followed by those of Nuevo León, Aguascalientes, Colima and Michoacán. The option to break the federal tax pact already includes the possibility of making a popular consultation to say whether to continue or not. This situation occurs as part of an electoral process, with a view to approving the 2021 Budget and also in a personal struggle between the governors of the Alliance and President Andrés Manuel López Obrador. 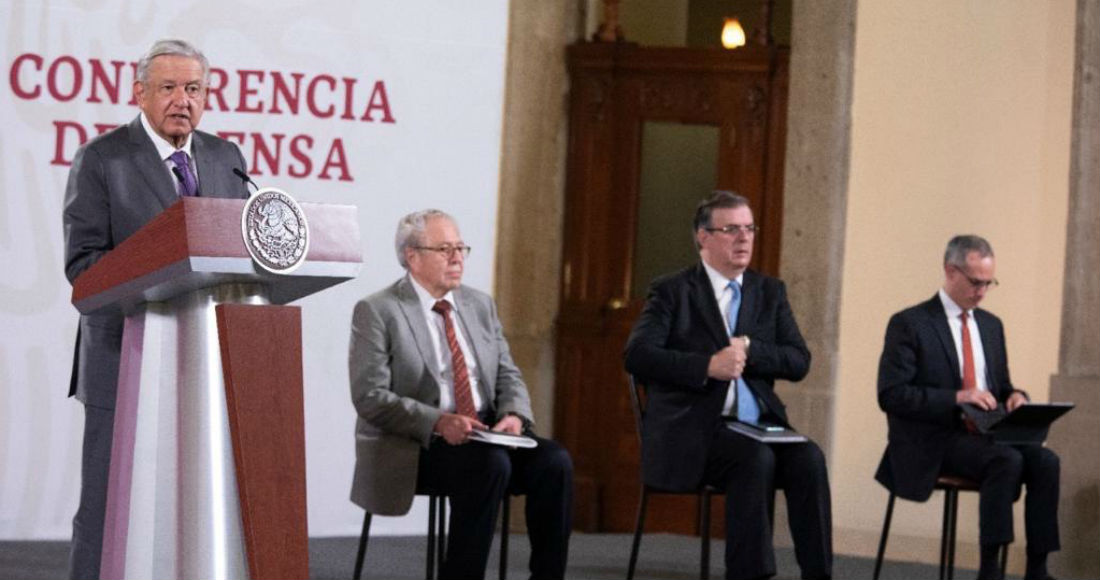 Mexico City, October 28 (however) .- It is not the first time that a governor has threatened to break the federal pact, but getting out is not a quick and easy matter when most entities have problems like a high debt -How is the situation in some of the states that make up the Federalist Alliance– and with dependence on federal transfers, which make up 80 percent of its Resources.

Until yesterday, the leaders of Nuevo León, Jaime Rodríguez Calderón “El Bronco”; de Colima, José Ignacio Peralta, and Aguascalientes, Martín Orozco, reported that they are already analyzing a consultation with citizens to find out if the residents of their entities wish to abandon the federal pact. In addition, Silvano Aureoles, from Michoacán, joined the Jalisco initiative, where Enrique Alfaro said Tuesday morning that he will carry it out, in response to President Andrés Manuel López Obrador’s appeal.

Faced with the threats of this Federalist Alliance to break the federal pact if its complaints about budget cuts for 2021 are not addressed, President Andrés Manuel López Obrador said that this possibility is not feasible, but he invited the governors of this group to consult citizens about that.

However, interviewed experts on the subject of the pact. They agreed that from the beginning it is not a simple decision, because in addition to the desire to “separate” and the procedures at local and national congresses, there are capacities from each state to start collecting, especially when we are in the 80s today resources come from federal transfers. 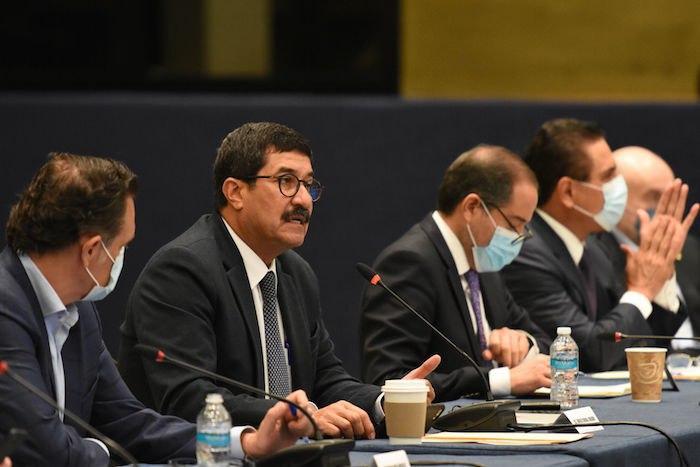 On Monday, yesterday, the 10 governors of the Federalist Alliance carried out acts in each of their states, in order to demand different actions from the president. Photo: Cuartoscuro. 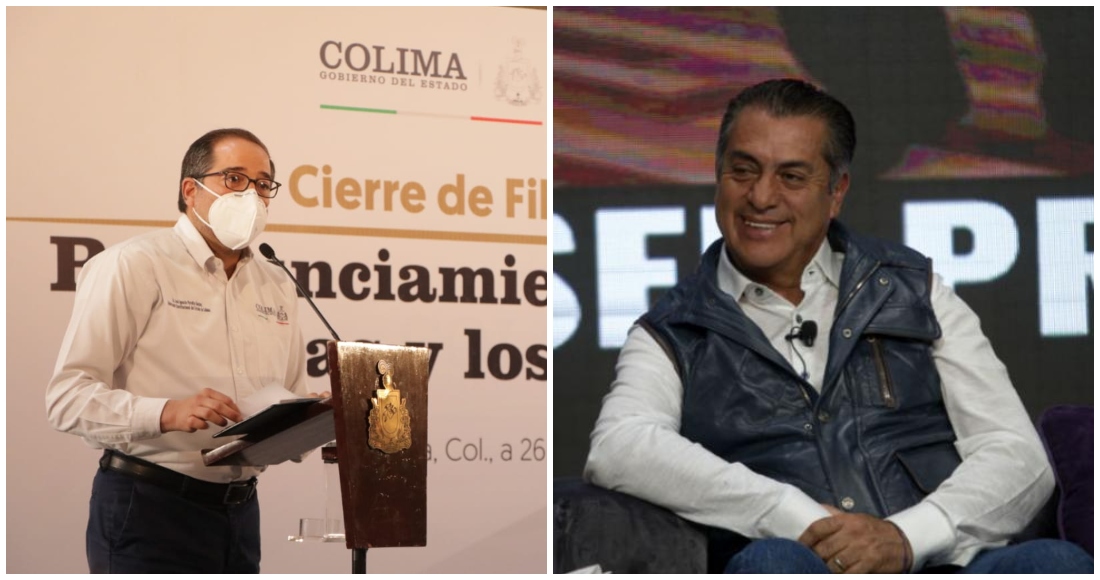 To start with this would imply a process of more than two years in which physical and human infrastructure will be available to carry out new tasks and establish a tax structure where the entity that separates is in charge of collecting its own taxes.

On the other hand, there is the issue of debt and the problems that have Alliance states like Chihuahua and Coahuila. “If the debt is related to total revenue, the problems are many. Chihuahua would have to allocate 70% of its total revenue to the debt and Coahuila 75% ”, commented in an interview Professor Raúl Ignacio Morales Chávez, an academic at the Faculty of Higher Studies (FES) Aragón of the National Autonomous University of Mexico (UNAM).

For him, although the fiscal issue has already assumed political contours, the pact must be revised because it is worn out. In the past, in 2007 with Felipe Calderón and in 2013 with Enrique Peña Nieto, the protests of the governors were calmed by the creation of funds to which the oil revenues of those years went and calmed the rebellion to demand more Resources.

“Patches were made, the situation was silenced with money cannons, but the problem remains that has not been solved behind the scenes […] In 2007, something similar happened with the PAN, which many were dissatisfied with the participation and resources they had. A reform was made and what saved was the increase in the price of oil internationally and a lot of money came in, funds were created to compensate for the tax drop that occurred. […] In 2013 the same thing happened: there was a sharp drop in shares and the states took up arms and said they were asking for compensation for the resources. What Peña did was to take resources from oil prices and create funds to balance and deliver more resources to them, ”said Morales Chávez. 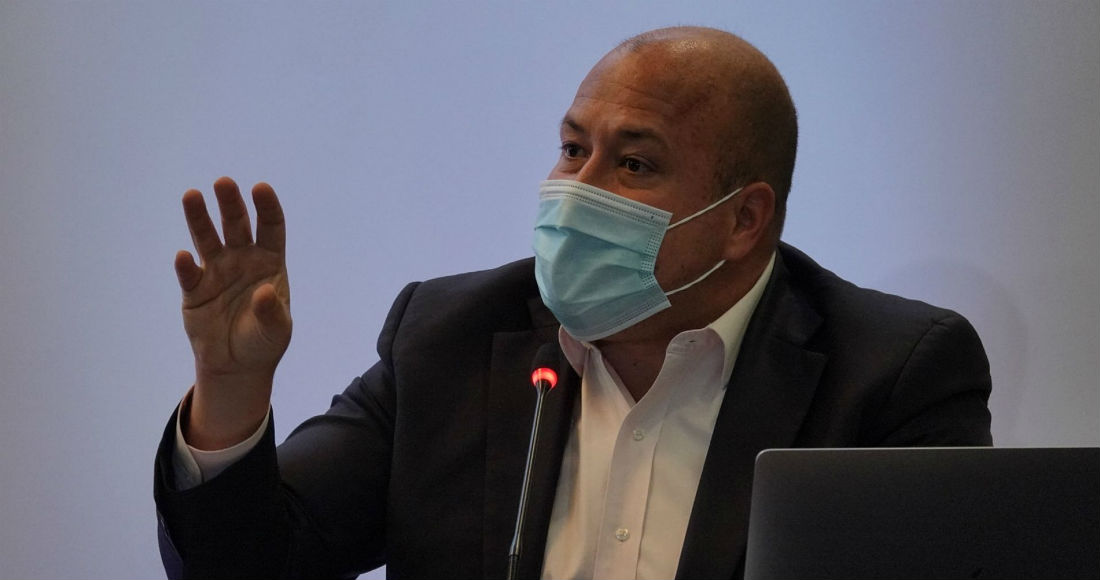 The Federal Pact was designed to promote the equitable development of all members of the Federation, “never to perpetuate contrasts and delays. This requires moving towards federalism that is an effective instrument for the redistribution of resources and opportunities. This Plan recognizes that all levels of government, states and Federal Government bodies must jointly assume programs and actions to balance resources and opportunities, in order to mitigate development disparities between states and between municipalities ”. It can be read in the National Development Plan.

Christopher Cernichiaro Reyna, coordinator of local public finances at the Center for Economic and Budgetary Research (CIEP) explained that the elements that make up the fiscal pact are federalized expenditures, which is the grant of resources that the federation delivers to states and participations, which are the resources that are given to the states and that are freely available, that is, the states can use them for whatever they want.

In analyzing the use of this money, according to what was reported by the Federation’s Audit Superintendence (ASF), it is used to finance the daily functioning of subnational institutions such as their secretariats, universities, etc. 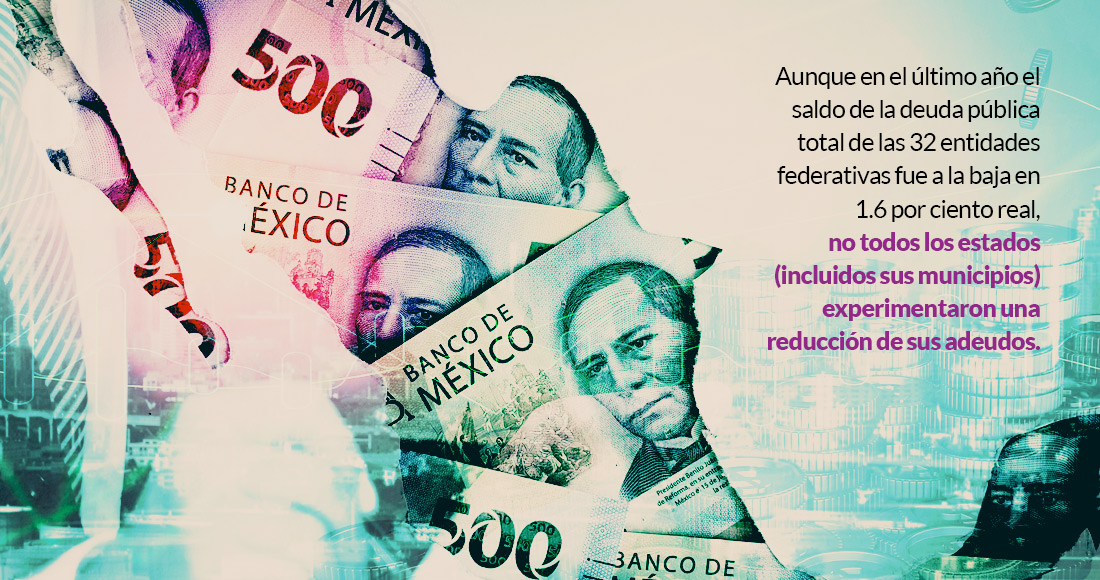 Another important element is contributions, which are labeled resources that go to the areas of health, education, social infrastructure, assistance, public security. “Leaving the pact would imply having less resources for the purposes we mentioned, there would be a direct implication in the daily functioning of the institutions, which has been labeled as health, education, infrastructure,” said Cernichiaro Reyna.

The federal participation, continues the researcher, are distributed according to formulas that are in the Fiscal Coordination Law, which will give more resources to the states with higher GDP and higher local revenue, that is, higher economic activity. For contributions, the criteria are taken from whoever is behind; “It is the nature of the fiscal pact: on the one hand, it rewards economic activity, but it also does not leave behind the most backward states, but if states start to leave, that balance may be lost.

Asked if the rupture is feasible, the UNAM academic says that it is more of a political issue and highlighted: “this group is made up of five PAN governors, two PRI governors, one PRD, one from the Citizen Movement and an independent one. ”.

He mentioned that a factor that triggers the disagreement of the governors is something that got out of everyone’s control: the coronavirus.

According to their data, as of August, contributions increased by 4.2 nationally and for Alliance states it was 3.8 percent. In contributions, on the contrary, Jalisco received 5.4% more, Chihuahua, 4.6% more and Aguascalientes, 6.1% more.

With regard to participations, which are compensatory resources of free application, as of August 2020, the Alliance saw the resources obtained obtain a decrease of 7.2 percent. It is slightly less than the national average of 7.3%.

“Why did the stock fall? This is a non-programmable budget and depends on federal revenue and the revenue raised by the federation has been reduced by 4.6 percent from August 2020. This means that as a result of the decline in economic activity, taxes have fallen, participatory federal revenue has fallen, ”he explained. 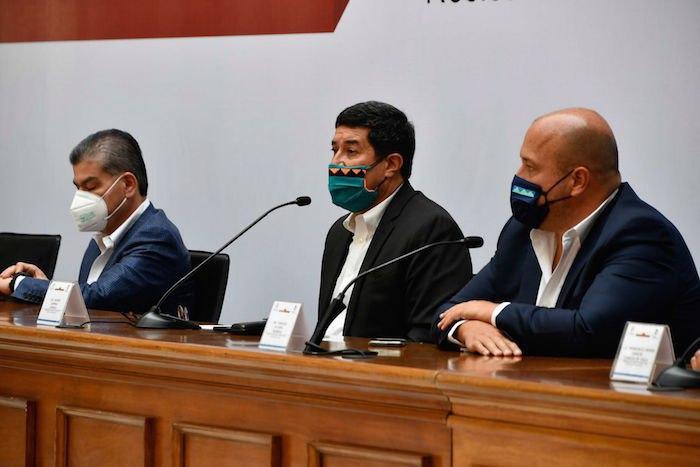 Governors’ demands are met during the election period and days after the approval of the 2021 Budget. Photo: Cuartoscuro 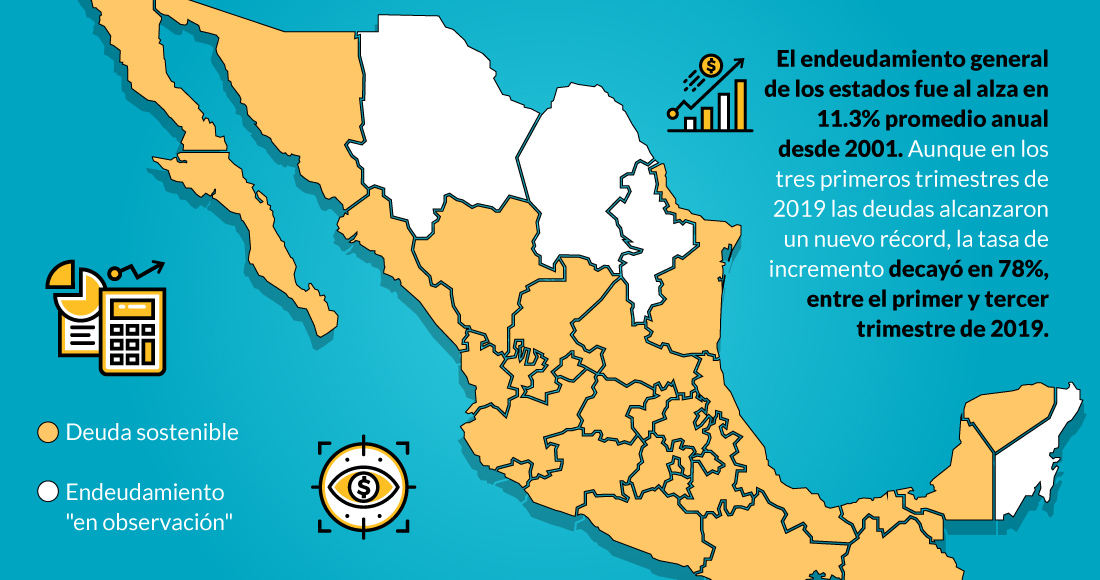 The professor at FES Aragón offered other information: that of debt.

“One of the issues I analyzed is the second quarter, the debt of the Alliance, the states that are leading this idea of ​​separation, which are Chihuahua and Coahuila, are the most indebted. If the debt is related to total income, there will be many problems. Chihuahua, 70% of the total revenue would have to be dedicated to debt, Coahuila 75%. They have a very strong problem regarding the level of indebtedness and the resources they raise. This is one of the main aspects ”, he commented. 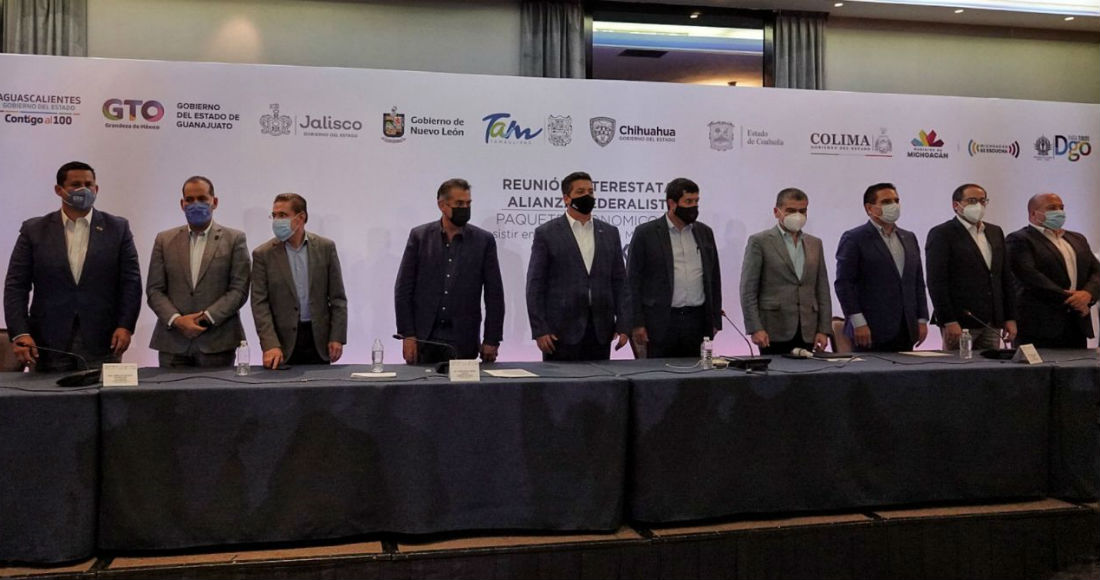 Although these commitments were made during the six-year terms of César Duarte Jáquez and Javier Moreira, respectively, they have not been reduced.

On Monday, the 10 governors of the Federalist Alliance carried out acts in each of their states, in order to demand different actions from the president, as well as “the lack of dialogue with them”, as this “will put consistency and reason at risk to be part of our federal pact ”.

Governors called for more in-depth dialogue with the federal government and, thus, build better agreements. “We are not prepared to tolerate further abuse from them,” they said in a statement.