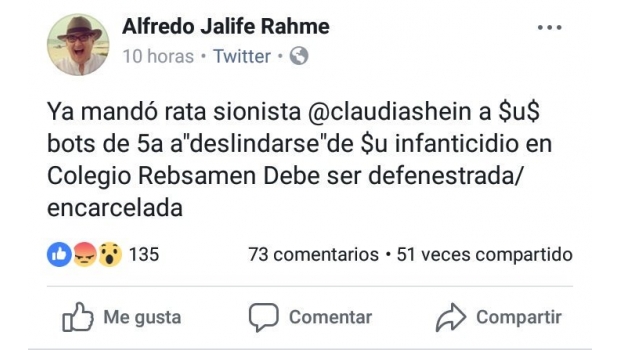 Some time ago I received the letter and the request to sign it by mail. While I am probably the person who had to defend against absurd legal attacks against me by Alfredo Jalife's sucker – I defeated him twice in long civil trials and four in complicated criminal trials – and though for years this guy I insulted and slandered Twitter, I did not sign because:

1.- Andrés Manuel López Obrador did not decide to mention Jalife in one of his morning press conferences. He spoke of the racist, misogynist, homophobic, anti-Semitic and even Nazi character just because they asked him. This is because Jalife himself used one of his friends to plant the question. He has achieved his purpose and must be happy for the attention he is receiving now with the letter.

2.- President López Obrador has the right to think that Jalife is a good person. It's not something I should get involved with. If AMLO asked me, I would give my opinion. If he does not, I will not give. I only hope that one day the President of Mexico, in that Jalife, will speak to the honest head of government of Mexico City, Claudia Sheinbaum.

3.- If Andrés Manuel gives you an order in the government, will surely be the first time that the huevón of Jalife works, which in his case would be a severe punishment. July Hernandez, columnist for The journey, proposed that the name AMLO Jalife ambassador to China, which I interpret as an elegant way of the famous Shipyard to send that face to the chinada.

4.- Andrés Manuel does not like to be pressed. So there is the possibility that the President of Mexico sees the letter, is annoyed and simply does the opposite of what the signatories ask him to do: employ Jalife only to learn not to enter what the admired should not be Enrique Krauze, the controversial Jorge Castañeda, the always disturbed Hector Aguilar Camin, the good columnist Joaquín López-Dóriga, the accelerated jurist José Ramón Cossío, the controversial Rafael Pérez Gay, the never very pondered Federico and Jesus Reyes Heroles, the normally balanced Angels Mastreta, the slanderer like Jalife, Mrs. Maria Amparo Casar, the witty Salmon Chertorivsky and others determined to exercise a veto right they simply do not have.

5. Jalife owes me money as a result of so many judgments in which I defeated him – at least he has to pay me the fees of lawyer Eduardo Ostos, who gave me generous discounts, but in any case he charged. So it's good for me to have a job, because if I'm still unemployed, the only thing I'll get if I get my demands is to use the blender, and the truth be told, I'm not willing to intoxicate myself by using it. Alfredo Jalife has money in Lebanon, but legally I have no chance to demand that he pay me. The one who would have to find out if these resources abroad are legal or paid taxes is Santiago Nieto, from the Financial Intelligence Unit, who may have more important matters to attend to.

We are very worried and concerned that at your April 24 conference you referred to Alfredo Jalife as "a very good person" and opened the possibility of considering you for a position in your government.

Alfredo Jalife is the extreme representative of hate speech on Mexican social networks. His method is not debate, but infamy, insult, threat, and defamation.

Women have been subjected to harassment and harassment. Homosexuality is the object of its degrading expressions. It usually resorts to racial and religious discrimination, especially against people of Jewish descent.

Mexico needs a climate of respect, tolerance and conciliation, not of confrontation or anger.