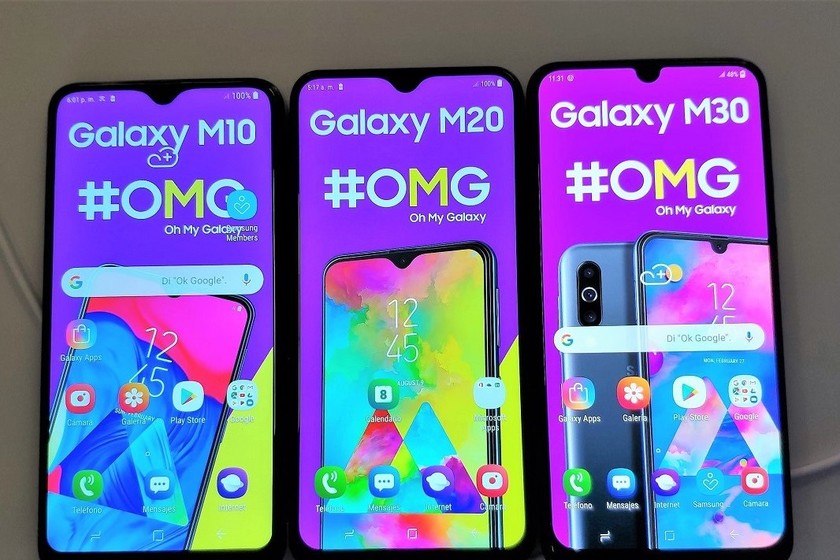 The Galaxy M family arrived in Mexico, marking a milestone in Samsung's history in the country. they represent a major change in the marketing strategy of their devices. However, let's leave this question aside and let's focus on our first impressions of the Galaxy M family.

Three options for all tastes and possibilities

Samsung wants to cover as much of the market as possible, which is why it designs three devices. The Galaxy M10, M20 and M30 share aspects such as plastic body, dual camera on smaller models, fingerprint sensor and large battery in the older, but all three with USB Type C port and facial recognition.

In addition, The main aspect that stands out in the three is its large screen and the small notch that the crown. It is important to mention that this is the first family of Samsung devices that incorporates this design aspect, after resisting for a long time. It was worth it because the screens Infinity-V (M10 and M20) and Infinity-U (M30) has some of the smallest notches on the market.

Returning to the subject of plastic body, it feels great in the hand, comfortable and of great quality. Due to the use of the front, the terminals are not too large, so their handling is easy, even with one hand. The back finish is polished so that the prints remain impregnated, though not as much as in other devices on the market. Finally, the gradient from black to gray in one of the variants looks great.

Galaxy M30 in its gradient variant from black to gray, the other two models are also available in this presentation

This time Samsung has its own hardware to bring the Galaxy M family to life. three different Exynos chipsets that are accompanied by 2, 3 and 4 RAM for small, medium and large models. Along with these components, Android 8.1 Oreo gives life to the devices. Special attention to the integrated Samsung Experience 9.5 layer as it is optimized to get the most out of Exynos chipsets, Samsung says.

This set of specifications shows during our brief tests which is sufficient for the correct performance of the devices. However, we know that this verdict can and will change during the time of use because we demand more when we carry out our daily activities.

Another striking aspect of the Galaxy M family are the batteries: 3,400 mAh for the M10 and 5,000 mAh for the M20 and M30. Impressive amounts that promise good autonomy, especially if you take into account the details of the hardware and software optimization that Samsung promises. However, it is an aspect of which we can not comment until we have tested the terminals for a long period of time.

Finally, the cameras also seem interesting, especially the triple arrangement of the M30. But on this occasion, we do not have camera tests because the lighting of the place was not adequate, which could lead to comments that would not be fair in portraying their true capacity. I hope you will soon have test drives to give you more details about this and other aspects.

It is inevitable to think that Samsung felt the need to take these devices seriously., in terms of its cost-benefit ratio because other companies have begun to eat part of their market. That is, if we take into account that originally the Galaxy M family was launched in India to counteract the overwhelming success of Xiaomi and his family Redmi, it is logical to think that with the same goal (or at least a very similar) arrived in Mexico.

Whatever the reason, as we always say, competition in favor of consumers may have access to more and better benefits at a lower price, it is always and will be welcome. In the case of Samsung, the surprise is pleasant and did not go unnoticed, the first comments that have been heard are positive.

We will see how is the Galaxy M family, who happens to dare to use the online sales format exclusively.