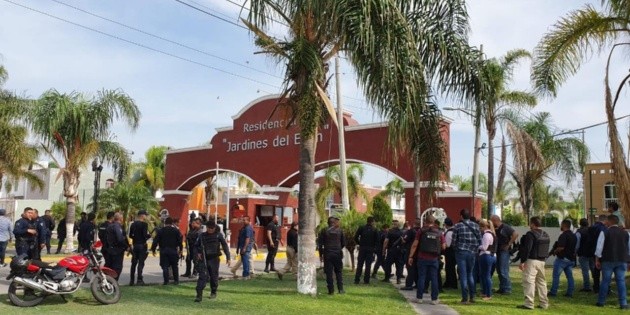 The morning of this Friday was presented a strong confrontation within a subdivision in Tlajomulco de Zúñigaafter Homicide of an element of Investigative Police.

Just before eight o'clock in the morning, a report was bullet aggression against a department in the subdivision Jardines del Eden, located on Avenida Javier Mina, west of Adolf B. Horn.

In the building lived the family of a police investigator, who was killed by a group of armed individuals. In this incident his son was injured, plus a civilian also died on the site.

After the aggression, elements of the Tlajomulco Police and the Attorney They went to the scene to begin investigations. However, shortly after eight in the morning they began a confrontation against the civilians, who remained within the fractionation.

After the exchange of photos, the support of the security corporations was requested. Dozens of metropolitan police units, the State Police, the Investigative Police and the Army attended the call.

The confrontation lasted more than two hours to try to subdue the armed civilians, who they took shelter at a fractionation address. Officers went to the rooftops to try to besiege the attackers.

It was reported that they were holding a kidnapped family, but in reality they were the same aggressors, who handcuffed themselves to try to deceive the authorities by pretending to be persons deprived of their liberty.

Around 10:30 a medical service unit came in. However, the actions are not over. Around 10:54 a detonation of a grenade was heard in the subdivision.

The authorities are still in effect today. There is a large security fence and an operation that even added helicopters.