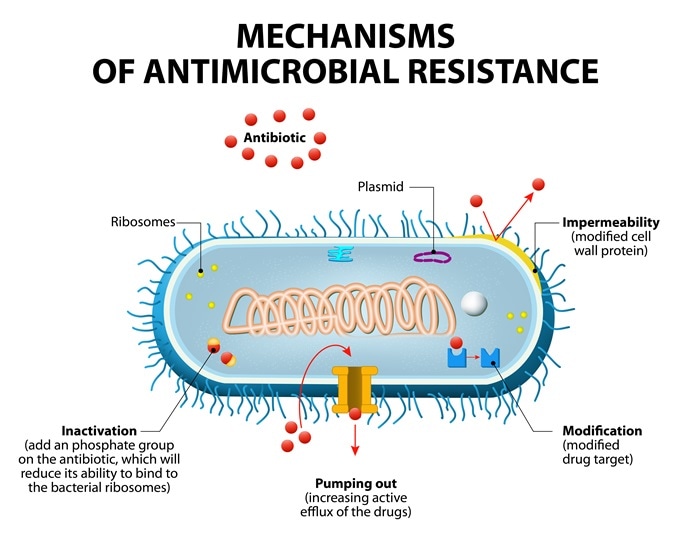 Resistance to antibiotics today is one of the world's biggest concerns and is likely to bring human civilization back into the pre-antibiotic era at this rate. A new report titled "Stemming the Superbug Tide," speculated that antibiotic-resistant insects are likely to kill more than 90,000 Britons in the next three decades if not restrained now. The Organization for Economic Cooperation and Development (OECD) report suggests that antibiotic resistance is likely to kill 2.4 million people across Europe, Australia and North America by 2050, if not stopped now. Of these 1.3 million are likely to occur in Europe and 90,000 are forecast in Britain, the report says. Antibiotic resistance is described as "one of the greatest threats to modern medicine" in this latest report. There are currently 44,000 annual deaths in the UK due to sepsis caused by strains of antibiotic-resistant bacteria. About 17 percent of all infections in OECD countries are due to antibiotic resistance, the report says.

The report informs that there are simple measures to be taken to reduce and delay the progression of antibiotic resistance. This includes handwashing routines, better hygiene and sanitation among health professionals. The report recommends the conservative prescription of antibiotics. They suggest that all infections need to be tested quickly for the antibiotics to which they are sensitive. This can prevent the emergence of new superbugs and also allow a better cure of infection in the first place. Empirical antibiotic therapy needs to be stopped, experts suggest. The report suggests that antibiotics can be stopped within the first three days when viral infections tend to subside. This would also avoid unnecessary antibiotic prescriptions. The report advises broad public health awareness campaigns to help people adopt safe antibiotic use policies.

The report warns that there is a faster emergence of antibiotic-resistant strains of microbes in low- and middle-income countries compared to developed countries. Many strains have already developed resistance to the first-line antibiotics against them. The report adds that over the next two decades, strains of bacteria would develop resistance to the second and third line of reserved antibiotics, and make it difficult to treat their infections. The warnings are relevant for countries in southern Europe, such as Italy, Greece and Portugal, which are the top nations at risk among OECD countries.

This report is one of the results of a campaign in England against patients who ask for medicines when they are not needed. According to Public Health England (PHE), antibiotics that are active against serious infections are routinely prescribed for minor infections, such as throat, ear, etc., which often improve even without treatment. The main slogan of the campaign was "antibiotics are not always needed".

Experts have suggested that putting in efforts to reduce resistance to antibiotics would yield in the long run and this report proves this. Tim Jinks, head of the Wellcome Trust's priority program for drug-resistant infections, for example, explained that antibiotic resistance is a threat to "global health and development." The OECD report says that increasing antibiotic resistance can raise healthcare costs to a large extent and stopping them now would reduce health costs to just $ 2.00 per person per year. Another three out of four deaths could be avoided if measures are taken now, the report says.