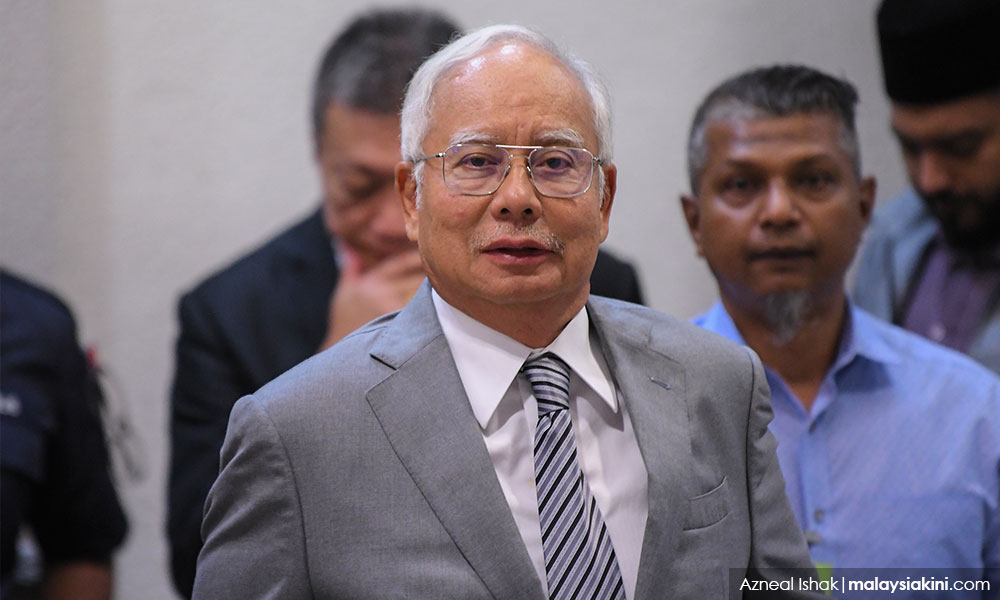 Malaysiakini brings you live reports of the proceedings.

9:45 – Najib enters the dock when the procedures begin.

He is seen sitting in the dock, holding the book he was reading.

9h32 – Najib enters the courtroom and sits in the public gallery. He begins to read a book and seems relaxed while waiting for the process to begin.

Also entering the courtroom is the defendant's main lawyer, Muhammad Shafee Abdullah, and the rest of the defense team, who take their seats ahead.

9.25 – Attorney General Tommy Thomas enters the courtroom of Kuala Lumpur High Court Criminal 3 and sits with other members of the prosecution team.

9:05 a.m. – Najib arrives at the court complex in a Proton Perdana car with the TN 50 license plate.

As he leaves the vehicle, his supporters – most of whom are women – begin to pray for him.

Najib, who is dressed in a beige suit, joins the prayers before exiting the lobby and heading upstairs.

8:45 – Forty supporters of former Prime Minister Najib Abdul Razak of his Pekan constituency, Pahang, arrive at the Kuala Lumpur Courthouse. They say they left Pahang at 5 am today.

The fourth day of the criminal trial of former Prime Minister Najib Abdul Razak, involving RM42 million of SRC International Sdn Bhd funds, is due to begin at Kuala Lumpur High Court at 9 am today.

Najib is facing a trial on three counts of criminal breach of trust (CBT) and an allegation of abuse of his position as then prime minister in connection with funds amounting to RM42 million linked to SRC International, a former subsidiary of 1MDB.

The 65-year-old politician, who was also finance minister and SRC International's emeritus adviser, also faces three counts of money laundering on the funds.

If convicted, the Pekan MP may be sentenced to up to 20 years in prison, whipped and fined for the charges of the CBT; a maximum of 20 years imprisonment and a fine not less than five times the amount of bribery involved or RM10,000, whichever is greater, for abuse of charge; and a term of imprisonment not exceeding 15 years, and fine up to RM15 million or five times the amount involved, whichever is greater, for the money laundering charges.

His case will be chaired by Judge Mohd Nazlan Mohd Ghazali, with the trial initiated this morning with the Najib defense team to interrogate the third witness of prosecution, analyst Mohammad Nizam Yahya of the Bank Negara Financial Intelligence Department.

He said the seized documents include account opening forms, specimen signature forms, a list of authorized signatures, due diligence forms for all three accounts, as well as statements related to the opening of such accounts.

Azizul, 41, said this was seen in documents on the accounts of Najib and the two companies, which he confiscated from an Ambank branch in Jalan Raja Chulan on July 6, 2015.

The attacks on both commercial banks came four days after the international business daily Wall Street Journal reported that investigators believed that at least $ 700 million had been deposited into Najib's bank account.