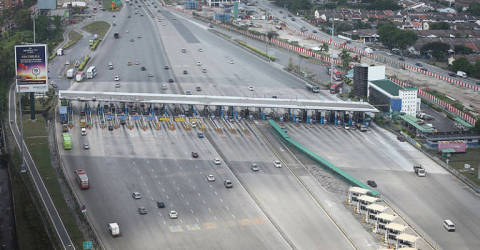 The four toll road concessions in which Gamuda Bhd has a significant stake are the Damansara-Puchong Highway (LDP), the Penyuraian Trafik KL Barat (Sprint) System, the Shah Alam Expressway (Kesas) and the Stormwater Management and Road Tunnel (SMART ).

Finance Minister Lim Guan Eng said the completion of the offer was subject to due diligence, the necessary approval of shareholders and creditors for each concessionaire, and final cabinet approval.

"If the process of acquiring these highways succeeds, the government will acquire the highway concessionaires on December 31, 2019, through a special purpose vehicle (SPV) wholly owned by the Minister of Finance (Incorporated)," he said. he said in a statement. today.

The SPV will finance the offer of RM6.2 billion through the issuance of securities.

Lim said under the new congestion charge system that was previously announced, passengers using these four highways would save as much as RM180 million per year, and these savings go right to the disposable income of Malaysian households.

The congestion charge model follows a variable pricing structure that depends on the time of day. In principle, the government would give discounts of up to 30% for off-peak hours and free trips during off-peak periods.

"In addition, the maximum congestion rate would be limited to the current toll rate in order not to overload passengers. The final structure of the congestion charge will be studied and refined in detail before being implemented on January 1, 2020, "he said.

The acquisition of these highways would also directly save taxpayers from having to pay indemnities of more than RM5.3 billion to the toll concessionaires in order to freeze increases in toll rates until the end of the respective concession periods.

Meanwhile, Minister of Works Baru Bian said that any proposal for the acquisition of any highway would only be decided by the Cabinet after taking into account the outcome of a study and recommendations of the Ministry of Labor regarding the general direction of the country to the toll sector.

He said the study report will only be delivered to the Cabinet in July.

"As mentioned earlier, the Ministry of Labor appointed an independent accredited audit consultant in January 2019 to study and analyze the direction of the country's toll sector holistically.

"Among the main principles or criteria of the study are the proposition of reasonable options that can be adopted by all stakeholders, such as government, concessionary companies and also people as clients, minimizing the financial burden of government and ensuring that standards of operation and maintenance unaffected, "he added. – Bernama