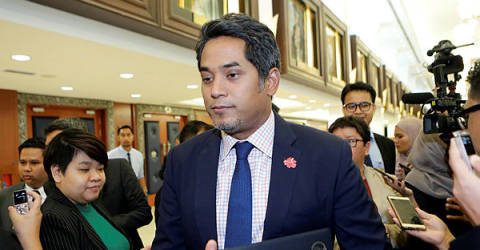 "This narrative that the government has no money and is forced to cut subsidies and subsidies for the poor is because 1MDB is not right," he told Dewan Rakyat today.

He admitted that 1MDB had its weaknesses, but also pointed out that its debt of RM38 billion was only a small part of government debt and liabilities of RM1 trillion more.

"The economy of the country is declining and the excuse that it is because of 1MDB can no longer be used," he said.

The former Youth and Sports Minister said the disappointment of the people in the government over their failure to deliver on the promises was clearly reflected in the results of the Cameron Highlands and Semenyih elections.

Khairy was debating the Bill 2019 Supplemental Supply Project, which seeks an additional RM19.6 billion to supplement the government's 2018 budget, which was delivered for the second reading today.

He also stated that the government guarantees given by the previous government that the Ministry of Finance said in May last year totaled RM199.1 billion were necessary to implement people-centered development projects.

He said funding for projects such as the Pan-Borneo highway should be made off-balance sheet. "Otherwise, how do we find funders?" He asked.

"Other projects considered scandals, such as Mass Rapid Transit (MRT) and Light Rail Transit (LRT), were also paid through compromised government guarantees. They were off-balance sheet items and we raised bonds to finance them, "he explained.

"If we had to rely only on conventional financing, when would we see the results?" He asked.