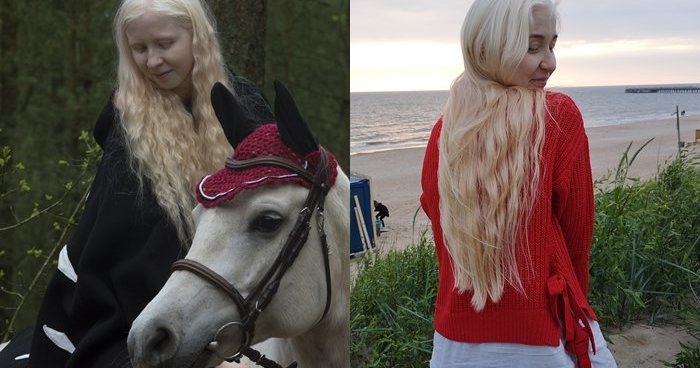 White skin, yellow hair and shiny eyes. These characteristics of Kamila Alexandrovich's 21-year attraction attract many passers-by. The girl is albino, but does not consider herself the owner of exclusive looks.

Albinism is a congenital condition in which the skin, hair and eyes do not produce melanin, so the skin in this condition is very pale and sensitive to sunlight, white or yellow in color and blue or pink eyes.

This hereditary disease is incurable. Albino doctors warn to protect themselves from harmful sunlight and keep a check on their health because albinism is not just about changes in appearance and sensitivity to the sun but also on other health problems. Most people with melanin deficiency have vision problems because their eyes are very sensitive to light.

"If it is very simple, my body does not produce melanin, it protects the skin from the sun and can be a hereditary disease or mutation." As far as I know, most of albinoism is accompanied by visual problems, and I did not avoid it. I have vision problems, "says a young woman about her illness.

He did not pay attention to bullying.

She is currently studying at Vilnius College and has chosen a specialty in childhood pedagogy. He chose to study pre-school and pre-school education because he is very fond of children and thinks working with children is easier and easier.

Kamila went to seventh grade at a school for weak-sighted students. Here she was studying with another girl who had congenital albinism, so she had no experience of bullying at this school.

Everything changed when the girl went to another school – teens tried to mock their unique look, but Kamila did not pay attention to those languages ​​and the bullying stopped quickly. Now, most of the time, the girl gets a nice attention because of her extraordinary appearance.

There are people who come and say "albinos" immediately, while others generally do not know anything about it and think that I am very bright. hair is natural.Then I always ask if I painted the eyelashes and eyebrows in white.Appearance attracts the attention of people, makes conversations and meets new acquaintances, says Kamila.

Although exceptionally shiny hair and skin attracted many eyes, the girl says that she never considered herself an exclusive owner and always felt the same as the others.

"I could never compare it to people who looked different. I do not even know, I used to think of myself as the other. I never thought it was anything different.

Now I'm coloring my eyebrows, but not because I want to hide something. But that was not how the cardinal changed and people would not understand. I reconciled and loved myself as I am, "says the interlocutor to TV3.lt.

As the biggest disadvantage of its appearance, Kamila refers to the extraordinary sensitivity of the skin and poor vision.

"In the summer, it's a nuisance, not winter. In the summer, I can not leave because my skin is very sensitive to the sun and it burns very quickly. It's enough to stay in the sun for 10 minutes and red all at once, "she says.

She says that redness can be avoided by applying sunscreen creams, but you need to brush quite frequently, at least every two hours. Creams should be with maximum sun protection. It is also necessary to dress with long sleeves so that there are no open places and the maximum possible body of the sun.