Photographing the sky so that NASA scientists will be praised for the image, how to do it will be available at the Music and Science Festival Postcosmos X. June 7 to 9 In addition to the Moltai Astronomical Observatory, the event will share its knowledge with more than ten astronomers, space historians, science enthusiasts and professionals, according to the report. 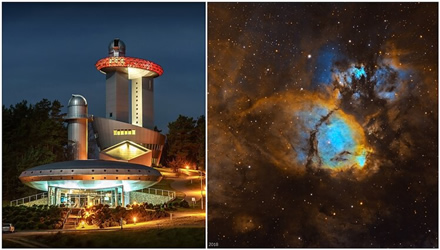 Museum of Ethnocosmology / Photo by the authors of the report

According to the organizers of Postcosmos, inspiring NASA's 60th anniversary, they were looking for more original ways of reproducing the festival's main theme, "space." And I used photography.

"When everything seems to have been captured and played on social networks, there are people who are surprised not only by ordinary viewers but also by NASA experts. One of these people is Lithuanian, he goes to the backyard of his house and captures the "We invite that person to ourselves and ask that we tell him how he does it and if we can," say the organizers of the festival.

Astrophysicist Arthur Medvedev, who reads the lecture at the event, was famous for stunning photographs of distant galaxies, many of which have been posted on NASA sites in solid publications. The man himself has assembled the equipment necessary for cosmic photography and says that everyone can do it. For the first time at the festival, Medvedev will publicly show how breathtaking images are captured and give time to tell about the processing of these images.

Understanding the world around us must be overturned by the popularity of the science of the festival speaker, the creator of science soup Ignas Kančys. This television program team is able to intrigue even those who are not interested in science and talk about difficult things in a simple and interesting way. "Science Soup" talks about love, memory, shale gas, GMOs, computer games, Lithuania's space satellites, DNA, NASA missions, artificial intelligence, and more.

For those interested in the secrets of space, a story about the first shot of a black hole in history will be relevant. In the lecture of astrophysicist Kost Sabul, it will be possible to learn how the image of the central supermassive black hole of M87 was extracted and what it adds to the understanding of the universe.

Postcosmos will pick up the personal human black holes. For the first time at the festival, Youth Line representatives will participate, with whom they can discuss emotional intelligence, invite them to look at their inner cosmos and provide valuable information on what to do and how to help others if Earth seems to be coming back to that side. as before.

Festival participants will be able to play the exploration of the very secrets of the universe. Excursions to the nearby Lithuanian Museum of Ethnocosmology and the Moltai Astronomy Observatory will take place at night, where the celestial bodies can be seen with the eyes through the telescope's lenses, as well as listening to the astronomers' stories.

June 7 to 9 Postcosmos X will be a rich and rich musical team at the festival of heavenly lights in the village of Kulioniai. Twenty artists, including Lea Porcelain, fast growing Germans, Dlyna Volny, Belarusians, The Station, The Complete, Black Water, Pindrops, Ruth Mur, Pioneers of the Non Real and many others.