After the controversy arose due to the appearance of Egyptian director Mohamed Khader carrying the shoes of his wife Yasmine Abu El-Naga, daughter of Egyptian actress Naglaa Fathy, Khader commented this on his own page, saying: “As for the photo of me and my wife , the photo happened, and we are fans of the hour. 1:30 am of the opening ceremony, we will not enter the opening ceremony, we will certainly not go to the party. Cameras, all there is is that after 6 hours of the ceremony, when we were leaving through the exit door, it was packed and all the people outside, artists, not artists, photographers and video cameras. “
And he added: “And my time is right, after 6 hours her man is tired like any other woman whose man gets tired of any joy … so she took off her boots! It is natural and manly and by education that I am the one who lowers his boots … A Shaila Betty has been on her head for 15 years. Hasn’t Hashil given her 15 minutes? “
And he continued: “The important thing was hit with my eyes. I thought the red carpet hall was open and empty. I said to her,” Let’s get out of here faster, “and we found dear photographer Muhammad Hamed, asking for a photo, and we stopped for 3 seconds, exactly … Frankly, the photo is delicious … and when I put it on the wall, I thought it worked for her, I went to the caravan “just for friends”. But then, people who ask me at the festival after the problems, I thank our Lord and thank you for your invitations. We announced last year and in the newspapers I wrote and wrote one of the organizers Talaat On television, he said that our work made reconciliation with Muhammad Khidr, salvation and took away his rights , and he remained the guest of honor of the festival every year and the year is called Sunnah of Peace is good .. and he has another year for me at the festival as a guest of honor, me and my time .. I thanked everyone the people who were beside me in Facebook And best wishes for the El Gouna Festival. “
He concluded: “The details of the conciliation contracts, whoever understands the law or knows someone who understands the law asks him and says that the details of any conciliation contract remain strictly confidential and it is prohibited to publish or make them, and do not apply penal conditions and large sums for those who violate this .. But what is understood in the big picture. I took my rights, salvation, and I also remained as a guest of honor of the festival every year and, in fact, the festival is delicious and strong in the year. There are very strict films and seminars that are frozen and frozen, so I will not see you when we return, God willing, a big hug and a big dress for all of you. 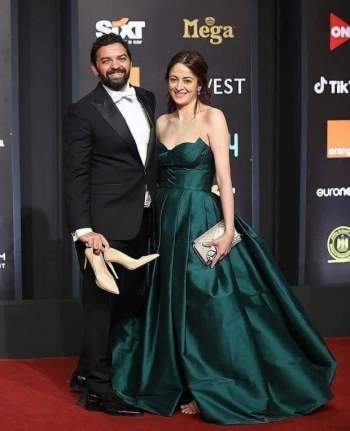