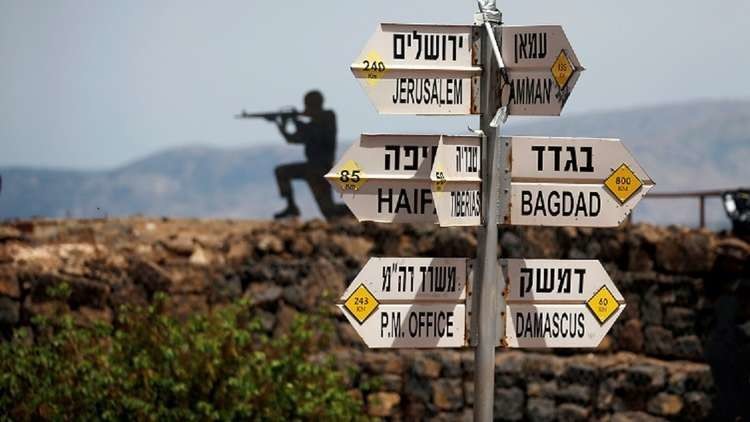 US President Donald Trump's recognition of Israel's sovereignty over the Golan was widely disputed by the Arab world, which confirmed Syria's dependence on the Golan Heights, saying the measure violated international resolutions.

Saudi Arabia has announced its complete rejection and condemnation of what has been described as the statement issued by the US administration to recognize Israel's sovereignty in the occupied Syrian Golan Heights.

The official Saudi Press Agency reported that Saudi Arabia confirmed its consistent and principled position in the Golan Heights:

"The Kingdom has called on all parties to respect resolutions of international legitimacy and the Charter of the United Nations," the statement said.

The Kingdom of Bahrain lamented the announcement by the United States of America of the recognition of Israel's sovereignty over the Syrian Golan Heights.

The Bahrain Foreign Ministry has stated its firm position that the Golan Heights are Arab-Syrian territories occupied by Israel in June 1967, according to UN Security Council resolutions.

The Kuwaiti Ministry of Foreign Affairs said in a statement that the decision violated international law and resolutions, especially resolution 497, which called on Israel to cancel the annexation of the Syrian Golan Heights and to consider its decisions in Golan as null and void legal effect.

The United Arab Emirates emphasized that this measure undermines the chances of achieving a comprehensive and just peace in the region, noting that stability and peace can not be achieved as long as Israel continues its occupation of the Palestinian and Arab territories.

And he stressed that the Golan is occupied Syrian Arab land, and the decision of the US administration does not change that reality.

Lebanon was the first Arab country except Syria to condemn Trump in signing the Golan decree, where the Lebanese Foreign Ministry said in a statement that "it violates all rules of international law and undermines any effort to achieve just peace The principle of peace falls "There will be no peace to be given."

The ministry emphasized that "the Golan Heights are Syrian Arab lands and no decision can change this incident, and no country can falsify history by transferring land ownership from one country to another." If Israel believes that it is expanding its land occupation through violence and aggression, it will find itself in greater isolation and in the face of a new military defeat, it will not benefit neither power nor racism, and will find no security but a just and comprehensive peace. And it will not benefit your new war in Gaza, which we strongly condemn.

The Palestinian presidency reiterated in a statement that "sovereignty is not decided by Israel or the United States, no matter how long the occupation will last, and the Palestinian cause and Jerusalem will remain in their most sacred places and the occupied Palestinian, Palestinian, Arab and international ones can not be circumvented. "

The statement said Abbas "emphasized that there is no legitimacy for anyone without the resolutions of the Security Council, the United Nations General Assembly and the Arab Peace Initiative."

Jordanian Foreign Minister Ayman Safadi said his country's position was "consistent and clear in rejecting the annexation of the Occupied Golan by Israel and rejecting any resolution recognizing that annexation as a unilateral decision that would increase tension in the region and do not change the fact that the occupied Golan is Syrian territory. " In accordance with the resolutions of international legitimacy and the Arab peace initiative ".

Al Safadi added that the international community's position on the Golan is clear under UN Security Council Resolution 497 of 1981, which rejected Israel's decision to annex the Occupied Golan and emphasized the illegality of law enforcement and administration by Israel to the Syrian Golan.

The Iraqi foreign minister announced by his spokesman, Ahmed Al-Sahaf, that "the United States' call to recognize the sovereignty of the Israeli occupation in the Syrian Golan gives legitimacy to the occupation and contravenes international law."

He added that "Iraq supports the resolutions of international legitimacy issued by the UN Security Council, which provides for the end of occupation."

Al-Sahaf emphasized that "the old age of the occupation, by placing its hand on the land it occupied, does not give it legitimacy and sovereignty over it."

Meanwhile, Kuwaiti Deputy Foreign Minister Khalid Al-Jarallah lamented the US decision on the Golan, saying he hoped to take steps to "stem the tension in the region."

He said Trump's decision would lead to "further strain and deterioration of the already heated peace process," underscoring his country's firm stance that the Golan is occupied on Syrian territory. He also pointed out that Trump's decision contravenes international law, Security Council resolutions and resolution 497, which calls on Israel not to annex. Golan Heights.

Kuwait, through this statement, urged American "friends" to retreat from the decision because of negative reactions and repercussions.

In turn, Qatar expressed its "rejection of the United States' recognition of the sovereignty of the Israeli entity in the Golan Heights of Syria" and renewed in a statement from the Foreign Ministry, "reaffirming its position on the principle of permanent Golan Heights occupying the Arab land ".

"Any unilateral decision to recognize Israel's sovereignty over the Golan Heights will be a major obstacle to the desired peace in the region," she said.

Arab League Secretary-General Ahmed Aboul Gheit criticized in the strongest terms the United States' decision to recognize Israel's sovereignty over the Golan, saying it was "a null and void decision."

In a statement, Aboul Gheit emphasized that the Trump Declaration reflects "a situation of breaking international law in spirit and in a way that reduces the status of the United States of America in the region and even in the world."

The Secretary-General of the Arab League stressed that the American declaration does not change anything in the legal status of the Golan, emphasizing that the Golan is a occupied Syrian territory that no state recognizes Israel's sovereignty over it.