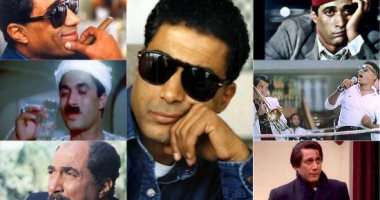 Sunday, the anniversary of the birth of the late black tiger Ahmed Zaki 69, this wonderful talent left our world and left behind the authentic Egyptian "brown eyes look" is still stuck in the minds of all fans of Ahmed Zaki of girls and men, even after his departure from our world since 2005.

Ahmed Zaki is one of the hallmarks of Egyptian cinema, that he managed to feel the audience as one of them, embodies his dreams and hopes and conveys his cries and joys, and began to incorporate the leading role in his films like Nasser 56 and the days of Sadat also excelled in the role of doorman in "He did not fail to present the role of the drummer and the son of Pasha, if necessary." He represented and incorporated his roles with all his senses. even her hair head.This was after her role in the movie "Kapooria" So lively.

No one disputes that the artistic talent of the artist Ahmed Zaki has not been repeated over the years. In his artistic career, Ahmed Zaki presented more than 65 films enriched by Egyptian cinema, incorporating the wonderful personalities that are already around us in Egyptian society. 6 .. Learn about the highlights of your work during the next few lines.

In this film, Ahmed Zaki presented a model of a corrupt lawyer who used to be in the courts in cases of compensation and took notice of his own affairs, in addition to his constant defense of the misfortunes in the cases. Prostitution, and at the same time is a person with a "temperament", and despite all this is exposed to a situation collapses in front of it all, where the issue of compensation of parents of students collided school bus carrying them by train, Mustafa takes the case but finds that his son, who knows nothing about The victims of this incident are dubbed his life upside down and continue his way after he died Non-concepts, and standing in front of the judges in court, calling for accountability of senior officials and ministers, despite the pressures they are exposed, but remains cohesive and recognized all social crimes and be an opportunist lawyer before the court, which won the sympathy of the public.

"He and She" is a series of giants Ahmed Zaki and Suad Hosni, and their story revolves around a dramatic work composed of several separate episodes. Each episode discusses a different issue of men and women and their relationship to each other. They were co-starred by Zahra Al Ola, Tahia Cariouka, Mahmoud El-Gendy, composed by Salah Jahine, directed by Yahya El-Elami, and the series was produced in 1985.

"The days of Sadat

The film "Days of Sadat" is a milestone in the march of the late star Ahmed Zaki where he introduced in 2001, after standing out in the introduction of the personality of the late leader Gamal Abdel Nasser, and before Taha Hussein in the series of days, the film was the only production experience of the late Ahmed Zaki. The film was successful for almost three months, filmed by Ahmed Zaki, Mirafat Amin, Mona Zaky, Mohsal El Behairy and Eissa Younes, and Ahmed Bahgat and directed by Mohamed Khan.

The stage of artistic maturity of the late Ahmed Zaki came in the films "Al Bara, Al Baba Al Bawab, Egg and Stone, Ahlam Hind and Camellia, the Emperor, the wife of an important man, a woman who is not enough and escape", and many others that are not enough to speak.