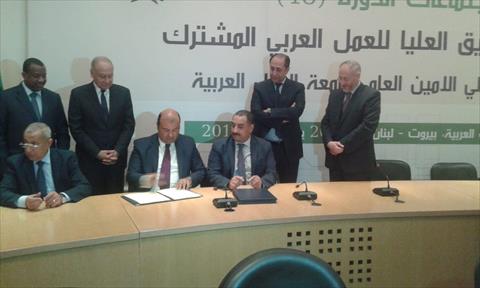 Dr Khalid Hanafi said that the Federation of Arab Chambers as the real representative of the Arab private sector will seek to strengthen coordination and communication between official and competent authorities and between the Union of Arab Chambers and the affiliated bodies of the Union system to remove obstacles investment outside the Arab world. Achieving Arab economic integration.

In parallel to the meeting, three agreements were signed: the first is a cooperation agreement between the Arab Academy of Maritime Transport, represented by the Arab Institute of Commerce and Merchandise, the College of International Transport and Logistics and the Union of Arab Chambers in the training camp , education and consultancy, especially in the area of ​​logistics; Cooperation Agreement between the Union of Arab Chambers, UNIDO and Bahrain to organize the Third Global Forum of Entrepreneurs to be held in Bahrain, jointly with the Conference of Arab Businessmen and Investors, Scientific and Arab Federation of Chambers, UNIDO and Bahrain for organize the rally competition for Arab businessmen.