The place where the battle of Cesis began 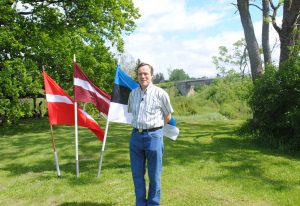 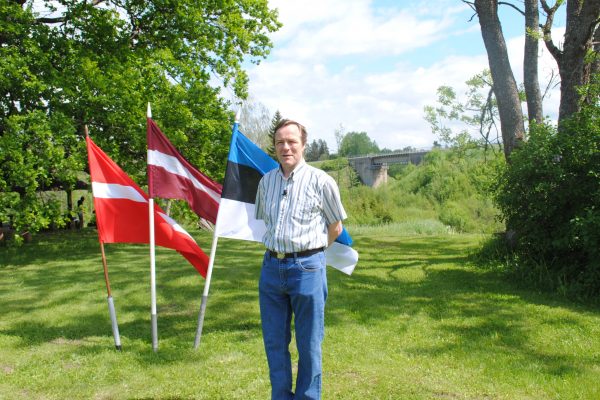 In a significant place. Estonian military historian Urmas Salo on the railway bridge over Amata, where for 100 years his grandfather, being an Estonian armored train No2. wagon gunner unteroficier along with others involved in battles against the landeswehr. Photograph: John Gabrans

In the village of the Drabesu parish of Amata, a place known as the "Battle of the Forest", the "Celebrate Freedom" event took place last Sunday, dedicated to the centenary of the battles of the Céssis.

This place is very important during the War of Independence, because the first confrontations between the Estonian army and Landesweh were kept here. The event was also attended by Estonian military historian Urmas Salo, whose grandfather was an unteroficier in Estonian Armed Train No. 2, who participated in the combat at Cesis.
The event was organized by the Municipality of Amata in cooperation with the "Association of Mariners of Latvia", whose leader Ēvalds Krieviņš emphasized the importance of this place: "It was here a hundred years ago, on June 5, 1919, that the so-called battle began Céses. The first battle of the Estonian army armed trains with the Baltic Landeser units took place. Knowing that an armed train was approaching, Landesweh was naming the bridge and taking positions in the house on the river bank, ready for a possible war. Therefore, this place is very important for the Estonians, because there was a border between their forces and the Germans. Historical evidence of events at the Amata Bridge did not survive. As Latvians did not participate in these events, there is no narrative of their memories, there are memories of Estonian soldiers, other sources. It could be said that this was a joint US battle against the Landeswehr, since the American army had an American officer who later fought in World War II. In general, many future World War II officers, commander, especially the German side, participated in the fighting in Cesis. "

Speaking of Cēsis battles, he said the name was not correct, as the front stretched about 150 kilometers from the Gulf of Riga to the Vidzeme highway near Rauna. The treatment of large events is also a bit different.
The Estonians proclaimed on June 23, when they entered Cēsis on their Victory Day, that Latvians believe that the battle against Skangali was more important on June 22, when a great advance occurred during the war and the Germans began to retreat .

"I admit, I'm not interested in the political side of these battles, but in one operation – tactic, so we tried to restore the battle in a minute." We walked around the area, analyzing what might have happened and how. Information contradictory, Estonians took events at the level of propaganda, exaggerated numbers for the fallen are not true. We discovered several myths, others rediscovered, "says Ed. Russo.

He did a research work with U. Salo, who is a specialist in the history of Independence War, studied documents in archives in Riga, Tallinn. He is also a reserve officer of the Estonian Army, so the military area is close and understandable, especially the family history.
U. Salo says he did not see his grandfather, he died in the 1950s, only after learning about the events on his father's Césp side: "Daddy started talking about them in the late 80s, and I started to care less before seven I came here years ago, where the Estonian army train started the first battle with the Germans. It was a special and indescribable moment to realize that he fought here and now me and us – Estonians and Latvians – can live in independent states. "

U. Salo admits that there are very few written testimonials of the time, events and grandfather did not leave them: "There are only photographs, there is no written testimony of grandfather's struggle. He told his father about them, but his father did not write anything, so he has to collect information from other sources. It is true that these stories, memories, should be approached in a somewhat critical way, because sometimes they seem exaggerated, there are stories of many fallen Germans and the like. Realizing the real situation, it is clear that it was not. "

According to him, the Estonian armored train arrived in Cisis on June 2, and one day later it went to Ieriķi, where talks took place with the landeswehr and on June 5, when the armed train approached again the Amata bridge, a collision with the Germans. The armed train later became involved in the fighting in Cesis a day later, helping the students of the school children who were threatened with encirclement. Although the Germans tried to break the rails to cut the train, he managed to retreat through the Rauna bridge.

Throughout the day, there were engaging events and discussions about the significance of the battles of Céssis in the Forest Battles. There was a detailed narrative of the events on the bridge over the Craft, the strategy of battle and planning. Representatives of the history rebuilding club demonstrated the clothing and equipment of Cēsis battle troopers. Look for ammunition waste with metal detector, demonstrations and other activities. The patriotic songs were received by the husband group of Priekuļi Parish Culture House, Neprāc.

The leaflet dedicated to the Césis battles and upcoming events was presented at the event. The issue will be available to everyone in Cesis and its surroundings.