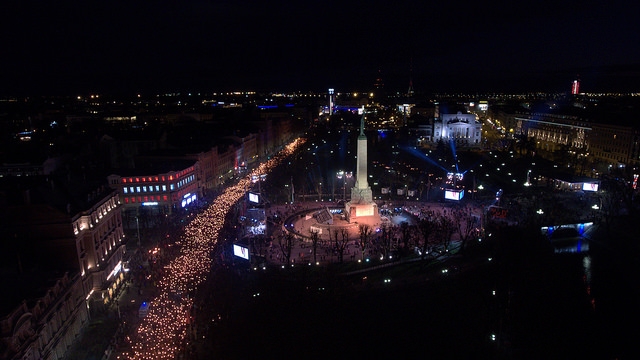 Several tens of thousands of people came for the walk and, for example, at the beginning of the event, the laurel column of the National Theater reached beyond the main building of the University of Latvia.

Most page participants walk in silence or talk to each other, but the walk organizers have also provided musical accompaniment. Pedestrians are accompanied by songs such as I came to shoot, Assisted Music and others.

This year the walking route was changed – the procession began at the Ulmanis monument, but continued along the Freedom Monument and the National Opera and Ballet of Latvia. After that, the direction of the procession was in the landfill of November 11, but the concert ends at the National Theater of Latvia, where Latvia was founded 100 years ago.

As DK states, the March 18 torch march began in 2003 at the time as a youth association. For all of Latvia! a tribute to the state of Latvia on the anniversary of its foundation. Every year, this procession brings together more and more members, and since 2005 it has reached several thousand. Since 2013, the number of participants has exceeded 10,000. According to the organizers, about 18,000 participants participated in the torch walk last year.