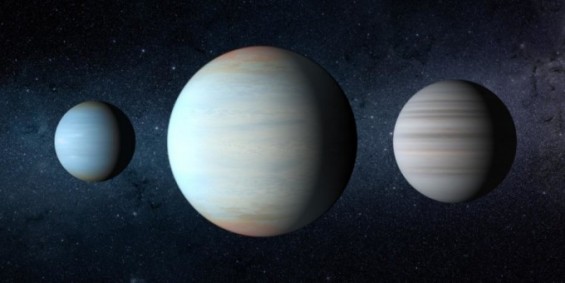 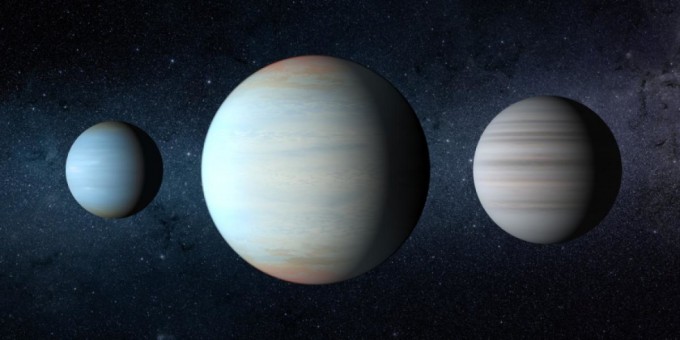 The third planet "Kepler -47d" (center) found by American astronomers in the Kepler-47 planetary system. The planets are 4.7 times and 3.1 times larger than the two planets discovered in 2012, confirming that the planets rotate between orbits that orbit the star. NASA / JPLCaltech / T. Pyle provided

A new planet was found in a mysterious alien planetary system, with two suns rising from a space 3340 light-years from Earth. The planetary system "Kepler-47" is the only place in the solar system (binary system), where two stars have been paired so far, where they found more than two planets. If you live on this planetary planet, you have two suns each day.

Jerome O. Ross, a professor of astronomy at San Diego State University, recently discovered the planet's third planet and called it "Kepler -47d" and published the results of his research in the journal "Astronomy Journal" on the 16th. research found two planets (Kepler-47b and Kepler-47c) in the planetary system last year and reported it to the academy.

As in the two earlier planets, the researchers discovered the planet using the "pass through the celestial body" method. The astronomical transit method confirms the existence of the planet by reducing the light of the stars when the planet passes in front of the star. Professor Oross said: "I thought there could be a third planet, even when I discovered two planets." But at that time, I was not convinced that the signs when passing through the planets were weak and I have been tracking them so far. "

Eventually, this time we discovered Kepler-47d, which orbits the orbit between the two planets. This planet is 7 times larger than Earth and 3.1 times and 4.7 times larger than Kepler-47b and Kepler-47c, respectively. However, the density of the three planets was smaller than that of Saturn. Saturn is the lowest-density planet in the solar system.

The central star of Kepler-47 was born about 3.5 billion years ago and is similar in mass to the sun. Of the two, the smaller stars are one-third the size of the sun, circling each other for 7.45 days. The researchers confirmed that the three planets had the innermost rotation cycle of stars: 49 days, 187 days and 303 days. The average temperature was 169 ° C, 10 ° C and 32 ° C, respectively.

In the academic world, the study results show that the extraterrestrial system is so incredibly diverse that it once again confirmed that the solar system is different from the general planetary system.