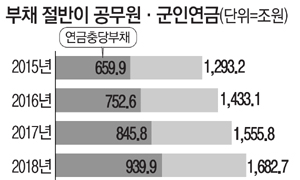 According to the government report on the National Accounts for Fiscal Year 2018, which was approved by the Council of Ministers on June 2, the value of the pension provision among the total national debt (1682.7 trillion won) was 939.9 trillion won.

In this regard, the Ministry of Strategy and Finance explained that the increase in the number of civil servants did not have a major impact on the increase in pension provision.

Lee Seung-cheol, deputy finance manager for the Ministry of Finance and Economics, said: "Public authorities retire for a year after joining the company, so last year's accounts reflect the provision of retirees for 2017" . And the debt is worth 75 billion won. "

The recent decline in the discount rate to 3% due to low interest rates is also attributed to the increase in the provision for pension provision.