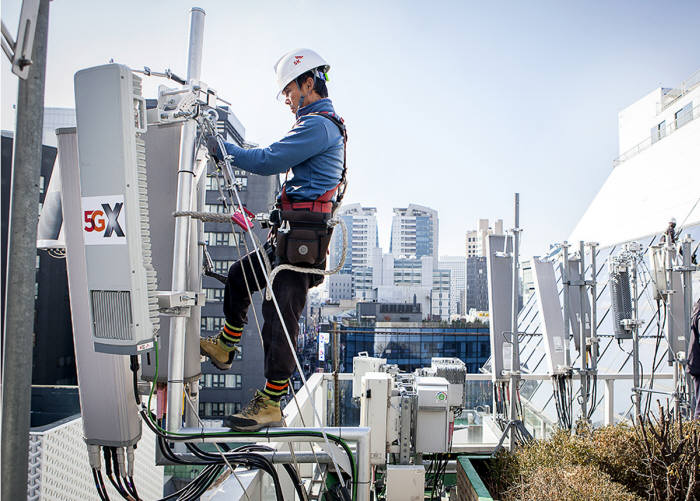 SK Telecom unveiled a 5G (5G) mobile communication base station that reduced size and weight and increased the efficiency of data processing by 8 times compared to LTE base stations. Beam Focus "that concentrates radio waves at a specific location.

The 5G base station that SK Telecom launched on the 14th was different from LTE in terms of configuration. The LTE base station installs a RU (radio unit = optical repeater) and an antenna, respectively. The 5G base station integrates the RU, antenna and DU functions to process data in & # 39; AAU (Active Antenna Unit) & # 39 ;.

The integrated AAU is easy to install and expand. The LTE base station requires a minimum of 10 square meters (about 3 square meters) because an optical repeater and an antenna are installed separately. The AAU is 1 meter high, 23 cm wide and weighs 24 kg, which does not require much space. SK Telecom and Samsung Electronics have designed a new type of base station considering the 5G, which requires two to three times as many base stations as LTE.

A part of the DU function is placed in the AAU to realize the extremely low delay required by 5G. DU The goal is to minimize the process of data transmission between the front hall connected to the AAU of the continent. The equipment structure can be simplified and the investment cost can be reduced.

The AAU is smaller, but its functionality is more advanced. (4T4R), which was 4 per LTE base station, to 32 (32T32R), and implemented the multi-antenna function (Massive MIMO). At least 8 times more data can be processed and the communication speed can be increased.

SK Telecom included the & # 39; beamforming & # 39; in the AAU. It is a technology that concentrates the radio waves where the user is driven and increases efficiency. We also implemented & # 39; MIMO multiuser (MIM-MIMO) & # 39; which simultaneously transmits data to multiple users. Even as the number of users increases, the same frequency capacity is allocated and speed reduction is avoided. It also has a beam tracking technology & # 39; which traverses moving objects and transmits radio waves.

SK Telecom has installed 5G base stations in the metropolitan areas of Myeong-dong, Gangnam and Ansan and major metropolitan cities. Currently, it is a step to calibrate the value of the simulation result and the value of the field test according to the cell planning before the construction of the real-scale equipment. Then we build and optimize the equipment.

SK Telecom said that the solution – 5G T-EOS & # 39; is the core of SK Telecom's technology accumulated over 34 years ago. Based on this, SK Telecom has designed a national network map called & gt; 5G Daedong Ryokdo & # 39 ;.

Kang Jong-ryong, head of the ICT Telecom Infrastructure Center at SK Telecom, said: "We are advancing the marketing process compared to global telecommunications companies. We will accelerate preparations for 5G marketing as this will lead to a preparation ideal".