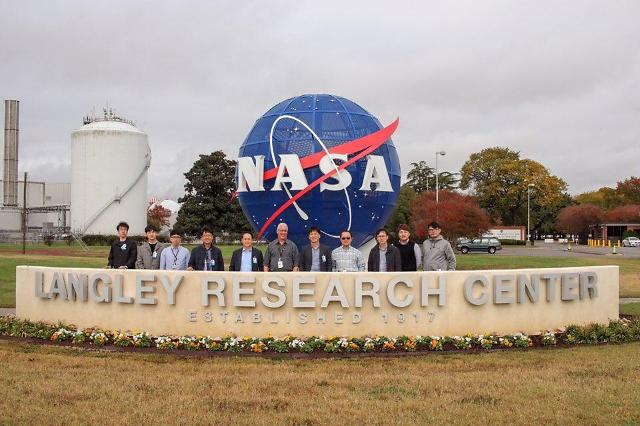 Inha University is stimulating a joint research with NASA NASA of NASA.
<! –

In particular, they have focused on technologies that allow the spread of more than 400m of film, which is the core technology of the solar probe, which has only 1/10 of hair thickness and the development of space materials that can withstand extreme spatial environments .

A team of scientists at the IST-NASA International Space Exploration Center visits the NASA Langley Institute to take a commemorative photo. [사진=인하대]

A solar sail probe can accelerate up to 30% of the beam with a space probe that uses the radiation pressure generated by the photons emitted by the sun. Theoretically, for three weeks, you can fly from Earth to Mars, which is called the dream probe.

Next month, Dr. Robert Moses, who manages the development of the manned residential system for lunar exploration and exploration of Mars, personally visits Inha University. Kimberly, director of NASA's technology transfer department, will visit Korea early next year to discuss the Lab-to-Market (L2M) program, which will introduce NASA technology and develop it together.

Inha University has agreed to conduct a postgraduate student exchange program with the National Aeronautics Institute (NIA), the agreement of the Langley Institute. As soon as possible, the program will run from next year. The NIA is a coalition of eight universities, including Georgia Tech and Virginia Tech, prestigious universities in the United States.

Inha University is working on the "Helios Project," an agreement between NASA's Langley Institute in March last year and the Space Act Agreement (SAA), a private agreement that allows NASA to participate in space development research. In April of that year, IST-NASA created the International Center for Joint Research for Space Exploration and Exploration,