He was also attacked by Heungkuk Life, but turned to GS Caltex 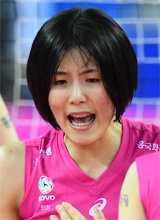 Professional volleyball player Lee Jae-young (23, Heungkuk Life, pictured) did not laugh at the team's loss, even though he scored the best result in his game. Jae-young Lee scored 40 points in the home game against GS Caltex in the second round of the Dodram V League 2019-2020 in Incheon on the 17th. Almost 40% of the 103 points scored by the team on this day were responsible alone.