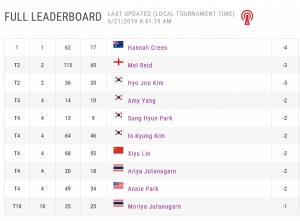 The first round of the KPMG Women's PGA Championship on the first day of the LPGA Tour's main tournament, held at the Hazeltine National Golf Club (Cheska, Minnesota, USA), was held on the 21st.

Kim Se-young, who finished in 3-under-par 69 with a birdie in a one-way comeback, was in second place with Englishwoman Melissa Reid.

Kim Hyo-ju, who won second place at the US Open at Ariya Juta Taganagh (Thailand), did not win the LPGA Tour for three years and five months since winning the LPGA Tour in January 2016 at the Pure Silk Bahamas Classic.

US Open champion Lee Jung Eun 6 (23, Daebang construction) finished 1-on-73 with Kim Se-young (26, Mirae Asset) and finished the first round in 32nd place.

Ji Eun-hee (32), Mi-hyang (27), the Korean migration from Australia, and Oh Soo-hyun were 46th with the two-up pair with two birds without a birdie.