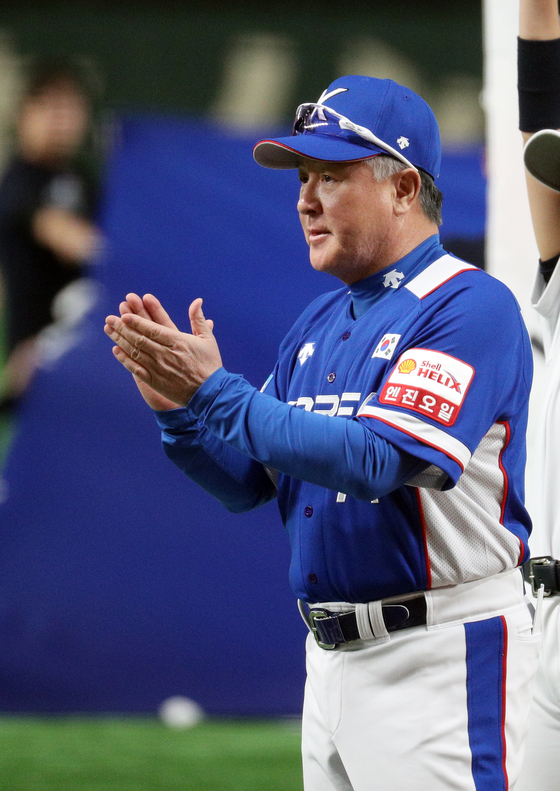 Kim Kyung-moon encourages players in the Premier 12 Super Round Japan game held at the Tokyo Dome on January 16. [도쿄=연합뉴스]

"Tomorrow will win." Kim Kyung-moon, who lost to Japan in the final round of the Super Round, promised to be greedy in the finals.

South Korea lost to 8-10 in the 2019 World Baseball Softball Federation (WBSC) Premier12 Super Round Japan game held at the Tokyo Dome on January 16. Korea got 1-7 early in the game, reaching a point but could not reverse. On the day of the match, Korea lost the Super Round to second place (3 wins and 2 losses). The home team of Japan (4 wins and 1 loss) rose to first place. But Korea has a chance. This is because they face Japan at the end of the 17th.

Kim Kyung-moon said: "I would like to win the game today, but I thought about the condition of the players because it is the important game tomorrow. When asked how you feel about Japan, he said:" The pitchers are also good. I don't know Pilseungjo's pitchers today.

Kim Kyung-moon also revealed her thoughts on the final formation. Kim said, "I think I should strengthen my defense tomorrow. I will come in and eat with the coaching staff.

On the other hand, Japanese captain Inaba Atsunori said: "It's important how today's victories connect to tomorrow's game." "Any team will change the order of play. The question about the information from Korean players is:" There is a lot of information and videos, but it can be different when you wear the team uniform. It is important how the athlete feels ".