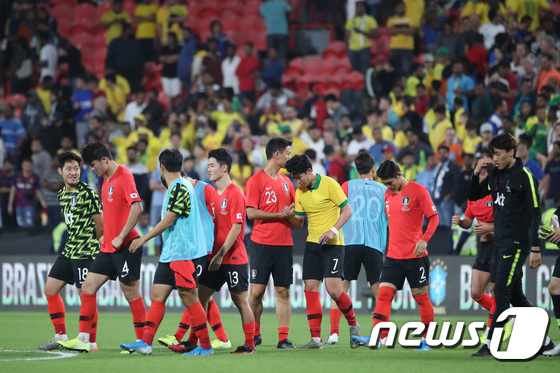 The Korean soccer team, led by Paulo Bento, was defeated 0-3 in the match against Brazil at the Mohamed Bin Zayed stadium in Abu Dhabi, Abu Dhabi, United Arab Emirates (UAE). .

As a result, Bentoho, who departed in August last year, lost 12 wins, 8 draws and 2 losses in 10 months after losing 1-0 in the Qatar Asian Cup. He scored three goals in most races after his appointment as Bento. In addition, Brazil and its opponents were 1-5.

In Korea, Hwang Eui-jo was appointed avant-garde, and Son Heung-min and Hwang Hee-chan were assigned to Lee Jae-sung. On the other hand, Brazil put Coutinho, Hisshalison and Jeju in the foreground in order to break the tie chain in five games (3 draws and 2 losses) with Ace Neymar absent.

South Korea allowed the first goal early. In the ninth half of the first half, Filipina Coutinho appeared on the left side and Henna Roddy crossed the ball and Lucas Paqueta headed in.

After 15 minutes, South Korean southpaw Sohn Heung-min, who received the ball in front of the penalty area, was blocked by goalkeeper Alisson Becker.

Since then, Brazil has been stubbornly targeting the right side of Korea, which Kim Moon Hwan endured. Lodi and Parketta continued to attack from the side, increasing their participation in the ball and forcing Korea strongly. South Korea compromised their counterattack with the back line.

But in the first 36 minutes, he allowed another goal. Coutinho kicked a free kick from the left side of the Korean penalty area with an exquisite kick to his right foot, and the ball left by Coutinho crossed the goalkeeper's hands and crossed the Korean goal net.

Korea missed the opportunity after 42 minutes of the first half. An area free kick was scored by a right footed shot from Jung Woo-young. It was blocked by goalkeeper Alisson, but Coutinho kicked the ball and hit the post. The situation can lead to a purpose of its own.

Subsequently, there was strong forward pressure, but Brazil continued to attack, with Parqueta, Jeju and Coutinho showing spectacular personalities.

Eventually, he allowed another goal again. On minute 15, Danilo crossed Rody's cross from the left and swung the Korean goal with a powerful long-range kick with his right foot.

Korea continued to aim for a goal in Brazil, but once again failed to get a definite chance for Brazil's solid defense and eventually knelt without scoring a goal.