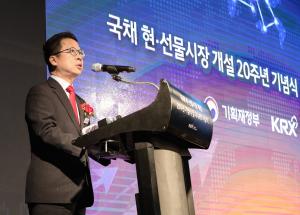 The Korea Exchange (President Choung Won) held a ceremony commemorating the 20th anniversary of the opening of the national treasury market.

It is the report of reporter Lee Seung-Yong.

The 20th anniversary ceremony of the opening of the KTB market was held at the Conrad Hotel in Yeouido.

The event was attended by 150 key figures including Lee Seung-chul, Deputy Assistant Secretary of Planning and Finance, and Chung Won-kee, President of the Korea Exchange.

The Ministry of Strategy and Finance has awarded the deputy prime minister's prizes to five out-of-the-box specialist KTB dealers such as Meritz Securities, KB Kookmin Bank, IBK Industrial Bank, Shinhan Investment and NH Investment Securities in the second half of 2018.

Chung Woo-won, president of the Korea Exchange, commented that the government bond market has steadily grown over the past 20 years and played a key role in the development of Korean securities.

"KTB interest rates, which are determined by the competition, are fully reflected in market requirements and are an important reference point to help make reasonable investment decisions and form appropriate prices for the bonds."

Before the Korea Exchange opened its national treasury market, Korean government bonds were bought by Bank of Korea for decades or traded in the offshore market.

The first government bonus in Korea was the government's title issued in 1949.

With the opening of the government bond market in 1999, government securities traded offshore were immediately traded on the open market as stocks and prices were determined according to market principles.

Since then, government bonds have become an important indicator of the basic interest rate and the amount of money in the Korean bond market.

Treasury bonds traded on the KSE market last year grew to about 2,387 trillion won, 60 times more than in 1999. That is 50% more than last year's 1.598 trillion KOSPI transaction price.