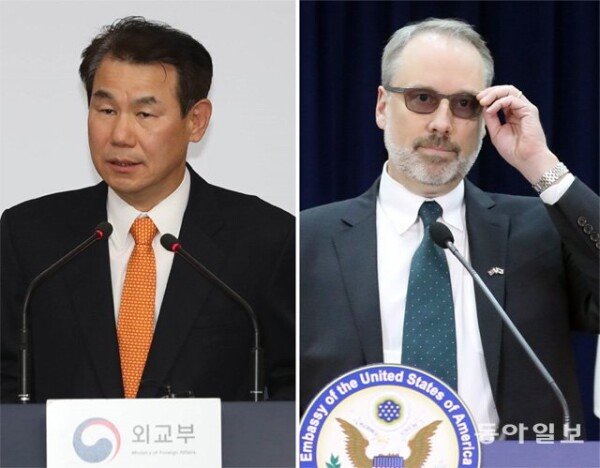 Jeong Eun-Bo-Heart Instructions On the 19th, the third round of the 11th ROK-US Special Defense Contribution Agreement ended. This afternoon Chung Eun-bo, representative of the Korean Defense Cost Sharing Agreement (left), reported to the Foreign Office in Jongno-gu, Seoul, and said: "It is true that there are significant differences in principle." . At the briefing at the Yongsan-gu American Center, Seoul, James DeHeart, US State Department of Defense cost-sharing negotiating representative, said: "The Korean proposal did not meet our needs." By Park Young-aid, team reporter sannae@donga.com

The fact that Korea and the United States declared an unusual advance in the SMA's third round of negotiations on March 19 was noted somewhat from the day before. This is because the US-Korea negotiating team has already met for the third meeting of the 11th SMA negotiations on the 18th and confirmed that there is a significant difference in the total amount.

Eventually, on the second day of the 19th, the 3rd meeting started in a cold atmosphere and broke an hour and a half after it started without discussion. US Delegation delegation James DeHeart said in a post-collapse statement that he hopes to resume negotiations when South Korea is ready to work on a partnership based on mutual trust. It is the backdrop to the observation that negotiations will resume only after both sides have narrowed the gap.

The biggest reason for the collapse was that Korea could not restrain its disagreement over the total amount of USFK defense spending next year. Chung Eun-bo, negotiator for the South Korean defense delegation, told a news conference on Monday: "There is a significant difference between the overall US proposal and the principles we intend to work on."

Specifically, the United States adhered to a “ fivefold increase '' nearly $ 5 billion in total, while South Korea "considered SMA's existing negotiating structure (only for Korean labor, military construction and logistical support)". I will stay with her. Maintaining the existing SMA structure is far from US demand growth of 500%, stating that it should not go beyond the 2.5 to 25.7% range, which has been determined as a result of 10 defense negotiations since 1991.. The United States is said to consider reducing the total amount slightly if Korea accepts some of its proposals to increase the total value by adding some items to the existing SMA negotiating structure. It is not related to this current that DeHeart told the interview after the collapse that day: "We were prepared to adjust our negotiations to an openly acceptable agreement."
In this regard, US Ambassador Harry Harris meets with National Assembly Information Commissioner Lee Hye-hoon on July 7 to discuss the defense cost of $ 5 billion. "It seems Ambassador Harris has repeatedly asked him to pay $ 5 billion in defense contributions (at the 7th meeting)," he said. Dehart did not hide the fact that the United States left the negotiations first. “Korea cut today because Korea did not respond to our demands. It is to give Korea time to reconsider its position. This reflects US President Donald Trump's style of increasing bargaining power by squeezing opponents and disrupting negotiations. The United States is known to be preparing for the announcement of Dehart's statement around 10 am that same day, and an analysis of whether the United States really expected a collapse from the moment it entered the negotiations comes from a diplomat.

After negotiations ended, US Defense Secretary Mark Esper said in the afternoon in Manila, Philippines that Korea is a rich country and can contribute more and should contribute more. When asked whether to withdraw the USFK when negotiations were finalized, the direct response was avoided: "The State Department is the negotiating department and the details should be left there." On the USFK issue, Chung said in an interview that "there was no reference to the USFK."