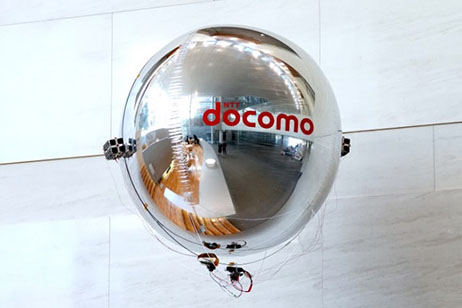 NTT DoCoMo has developed an airship drone that moves in the air with ultrasonic vibration without using a propeller. This highly secure internal drone is used to fly at event venues and concert halls, and is used for announcements and flight directions. We are thinking of using it for surveillance and security solutions that use aircraft-mounted cameras and overhead projection mapping that projects an image into the body of the drone. Conventional drones move in the air through propellers and fluttering wings, but blunt drones float by floating a balloon filled with helium gas. It travels through the air generating propulsion with an ultrasonic vibration module that can operate as an "air pump".

When it collides with a person or thing, there is no blade that can cause serious injury or damage. In addition, it uses an ultrasonic vibration module that generates wind with a minimal vibration that is safe for human touch. The sound during the flight is also quiet.

Image of projection mapping that projects image in drone case

The maximum diameter is about 90 cm and the maximum flight speed is about 20 cm / sec. The continuous flight time is about 1 to 2 hours.

Drone-drone without wings flying safely without using a propeller

It will be displayed on the "Nippon Telegraph and Telephone Mikakaland Corporation NTT Super Future Research Institute 6" at the "Niko Nico Super Conference 2019" to be held at the Makuhari Messe from April 27th. You can also try a demonstration of maneuvering the drone in the hallway. The results of the research will be presented at the prestigious international scientific conference "The CHM ACM Conference on Human Factors in Computational Systems (CHI 2019)", which will be held in the UK from May 4th.