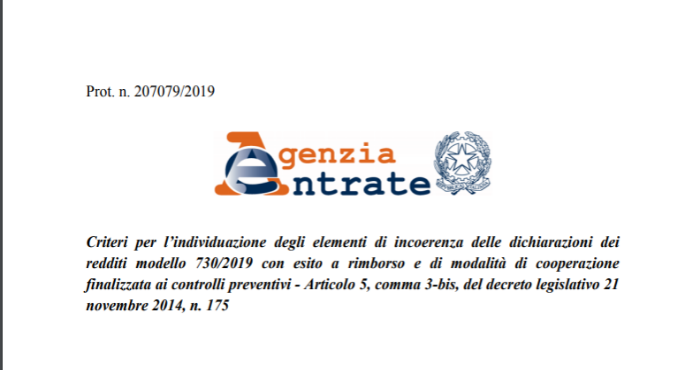 Refund form 730/2019, risk of controls and preventive block in the case of a value of more than 4,000 euros and significant changes in relation to the pre-filled declaration. The rules in the rendering of the Revenue of June 19.

Refund model 730/2019 with specific rules on preventive checks dell & # 39;Revenue Agency. You will suffer the to lock in personal income tax refunds taxpayers who have significantly modified the pre-filled declaration or those to whom reimbursement of more than 4,000 euros.

With the provision of June 19, 2019, the Revenue Agency regulated the rules on preventive controls relative elements of inconsistency present in the tax return resulting in a refund.

If July is the month from which income tax refunds will be paid based on the deductions and deductions indicated on Form 730/2019, they may have to wait a few more months for taxpayers who have significantly changed the Agency's pre-filled declaration of Revenues.

The risk of a refund block will be greater for taxpayers who have experienced in the past years risky situations due to irregularities, and the request for supporting documents will be in the interests of taxpayers entitled to IRPEF reimbursement; value over 4,000 euros.

Reimbursement 730/2019: the rules on controls that block IRPEF credit

The rules on prior checks on refunds of Form 730/2019 are contained in the provision published by the Internal Revenue Service on June 19, 2019.

The risk of a IRPEF rebate block recognized in the presentation of the model 730/2019 will focus on taxpayers who have significantly altered the data indicated in the pre-filled with those transmitted externally.

Not only the single certification, but also, for example, a change in deductible medical and health costs compared to those indicated in pre-filled form 730/2019 based on data transmitted by doctors or pharmacies.

Checks on personal income tax refunds, even in case of irregularities in recent years

Among the elements of inconsistency, Inland Revenue will also be evaluated irregularities relating to previous years.

If, for example, a prepayment blocking has already been made for the 730 model in 2018 or 2017, the possibility of verification by the Revenue of claims due based on what is indicated in the tax return will increase.

The verification will be carried out by crossing the data in the database of the Revenue and INPS, considering that it is the Institute that receives the accounting results (form 730-4) of the declarations directly from the CAF and authorized intermediaries. submitted by the taxpayers.

O irregularities check found in model 730/2019 can be performed within four months from the time limit for the submission of the tax return. These are the deadlines established by the Stability Law of 2016.

The refund due at the end of the preventive control operations will be paid by the IRS no later than the sixth month after the deadline for submitting the tax return.