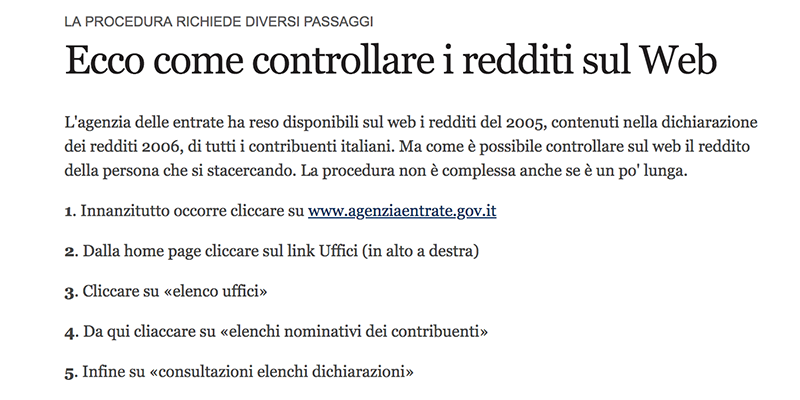 US Democrats are trying to get President Donald Trump's tax returns because, unlike his predecessors, he has so far refused to make them public. The House Finance Committee based its request on a 1924 law, then canceled: at that time, the federal government opened the files that recorded US taxpayers' income and the amounts they had paid in taxes. The timing and consequences of making everyone's income public with very similar arguments from one country to another have long been discussed. Issues that were also discussed in Italy in 2008, when for about 10 hours it was possible to consult the tax returns of all taxpayers online.

On April 30, 2008, during the government of Romano Prodi, the Revenue Agency posted, as never before, the tax returns of all Italian citizens in relation to 2005, available for consultation and divided by region (until then the declarations could only be consulted in the municipalities). The traffic was so intense that the site became inaccessible, and the widespread controversy that the Privacy Guarantor intervention was requested had decided to remove the lists from the site and make them no longer available for viewing. However, for about ten hours by clicking on the appropriate links and typing a taxpayer's first and last name, it was possible to get a series of data in a few seconds.

The provision was intended by Massimo Romano, director of the Revenue Agency who, in 1999, as general manager of the department, had issued a measure in favor of transparency, enabling the publication of the lists of taxpayers, but sending them to local tax offices and administrations municipalities.

Proponents of publishing practice, with proper precautions, say that income taxation is an act of government, not an aspect of private life. In Finland, where by tax law the taxable income of all Finnish workers is published on November 1 of each year, lawyers argue that publication increases transparency, hampers tax fraud and facilitates the discovery of large inequalities, especially in detriment of women and so-called minorities. In Norway, a study estimated that increasing the availability of tax records led to a 3.1% increase in income declared by self-employed workers. Transparency, according to some, could even contribute to economic growth: people who know how their peers get paid and how peers get paid in other companies or in other sectors could make more informed decisions in terms of careers.

The Privacy Guarantor said at the time that "the insertion of data on the Internet" was not "in itself commensurate with the purpose of knowledge of such data", emphasizing the substantial difference between the Internet and printed paper. In fact, according to the Authority, the use of a tool such as the Internet would have made "stringent guarantees for citizens." Instead, the data were inserted in a general and unprotected manner, allowing not so much the consultation, but the archiving, the creation of lists and the unlimited expansion of the period of knowledge that the law establishes for a year (Article 69 of Decree Presidential 600 of 1973 provided that such lists would be available for one year on paper for consultation both in the Agency's offices and in the municipalities). The Guarantor, said the then president, was not in principle contrary to the transparency of income: "A form of knowledge and transparency has been guaranteed for years and years, through the Municipalities and the Revenue Agency. data on the Internet, allowing them to be consulted in all parts of the world, to end up in the search engines, to remain in the network for a period that no one is able to control, where the law provides maximum one year.

In 2008, the controversy was very wide. They were the ones that opened personal blogs dedicated to the subject (type redditodelvicino.com), newspapers began to publish information on famous people or ordered rankings in Excel files. One of the most critical for the publication was Beppe Grillo, who in his blog called the list "infamous column": "Madness, this is madness, anyone can access without being identified, Mafia, & ndrangheta, camorra, sacred The united crown has suggested and Prodi, Visco, Padoa Schioppa presented themselves with the blessing of the center-left unicolo that never won. "And again:" This greedy, presumptuous, and failing ex-government provides criminals with information on income and address of taxpayers. Paying taxes in this way is very dangerous, better a tax evasion conviction than a stabbing or kidnapping. The fiscal relationship is between the private citizen and the state and this must remain ". The Adoc consumer association, in turn, had spoken of a flagrant violation of the privacy law and of a danger of increased crime and violence, since sensitive income data had been published, "a tempting source of information for criminals. "

Vice Minister of Economy, Vincenzo Visco, defended the transparency of the operation: "I do not see problems". And Marco Pannella: "I do not understand what the problem is. A public service corresponds to a public service: it is necessary to prevail the right to know and not be ignored. "

The Italian case ended only last year with a ruling from the Court of Cassation. After the guarantor, who established a sanction, Codacons intervened, the Coordination of associations for the defense of users 'and consumers' rights, which asked the Revenue Agency and the Ministry of Economy and Finance to pay compensation. 20 billion euros, about 520 euros for each of the 38 million taxpayers residing in Italy. The trial proceeded to the last degree of judgment and the Cassation, with sentence of June 2018, confirmed the sanction of the Guarantor (equal to 6 thousand euros), but denied any other type of compensation.