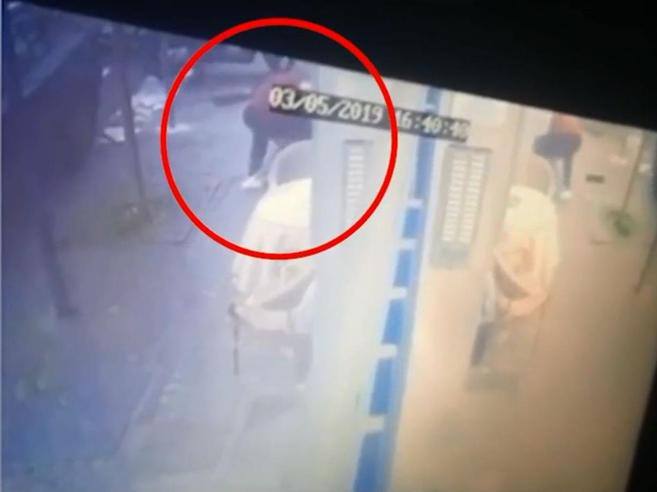 There is the man in black and the dress in white and with a red robe. And children always say that: the bad is the black man. They may even have told Naomi, and in any case the color of the skin has nothing to do with it: the black man is a fantasy image that someone finds useful to stop on a whim. But this time the real black man is very bad. And also ugly: fat, clumsy and with an iron head and a black mask like everything else.

With the red robe

The man dressed in white and with a red robe, on the other hand, has the face of an uncle. And he does Uncle's things: he puts a shelf in place, he assembles a tent, he just cleaned a table. And then he does not have a mask and he does not have a helmet: he only has gray hair. Yes, just an uncle, not a knight. And indeed the white tunic a shirt and the red robe a vest. For in the video released yesterday it really looks like a knight, if in a tragedy like last Friday in Naples you could risk hyperbole. The video makes the time come back and brings back those moments in Piazza Nazionale, in front of the Elite bar, where a man shot the wounded Salvatore Nurcaro and where Naomi was with her grandmother, waiting for her mother to leave the bar with her granddaughter he would finish to go to the bathroom

Images are blurry and muted. And to realize everything: the violence of the man dressed in black, the surprise – and certainly the fear – of the one with the red vest. And then the pain and the force to go immediately to that child that when the man with the helmet shot fell to the ground, and then the person passed to him, not a vote: two. While he was chasing Nurcaro to kill him and then back to escape. We still do not know his name, the police are trying to figure it out, and there's a whole country waiting for nothing else. The name of the man with the face of an uncle, instead, Roberto. He will be fifty years old and has worked as a waiter for a long time. a normal person, say colleagues, was almost surprised that even those with cameras even asked about him. Just the day you rest. Here we are all normal people, and it is good that no one has noticed how extraordinary his gesture was, evidently because he would have done the same if he had found himself in his place. But Roberto did it, and in the video you can see very well: instead of fleeing, hiding, he goes towards the child: he takes two steps and reaches for it, leans over it.

Then the images stop, but the rest remains a knight. Roberto took her in his arms and stepped inside. He brought it behind the counter, says Salvatore Laezza, the owner of the Elite Bar. He did not move near her, he gave her a glass of water to make her recover from her fear. But neither he nor we noticed the wound immediately. Naomi complained, said that her belly ached, and it was only when her mother left the bathroom that Roberto turned away because he was no longer needed. To run again when she heard her mother scream, after realizing that under her coat the girl had clothes full of blood. Colleagues say he stayed close to her until they took her to the hospital, and that currently she is always looking for news about her condition. At Elite's bar, troupes came with cameras and tripods, and reporters armed only with cellphones, and in one form or another all those working here were filmed and said something to a microphone. Everyone except him. He could have said, bragged briefly. But they say that Roberto does not. He simply did what had to be done at that moment, and who knows if they really would have done everything, even if it's nice to imagine it. And they also say that since Friday he has not been able to understand how, at that time, there was no patrol of police or prairie dogs in front of the counter. That at the Elite bar they usually go. We serve at least sixty or seventy coffees a day, says Laezza. But on Friday the man in black was lucky.