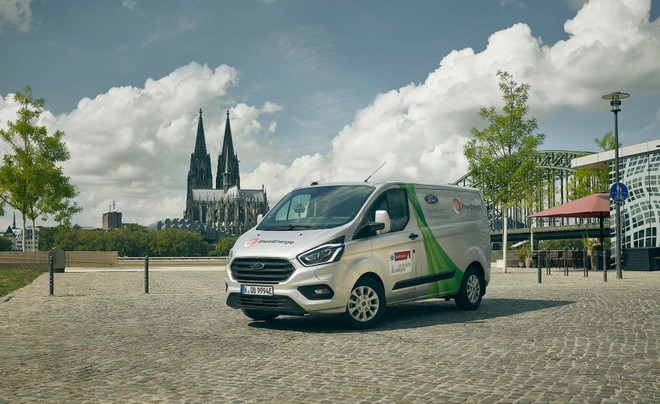 Drawing a line between the past and the future, Ford participates in the Padua Motor Show, dedicated to classic cars, alongside the new Plug-In Hybrid Transit, with the design's old declines, a history dating back to 1965.

The Ford Transit was officially born on August 9, 1965 in Langley, England, but its origins are rooted in 1953. That year, the Ford FK 1000 (later renamed Ford Taurus Transit) embraces the concept of a spacious and versatile vehicle, becoming a work and service vehicle (Fire and Rescue Brigade).

In the 1950s, there was also the Ford Thames 400E, a model that joined the Taurus and pointed to the continental part of Europe: to contain development costs, it was decided to start the project. Redcap who gave birth to the first Ford Transit.

Upon entering service, Transit immediately showed his double soul: on the one hand, he was chosen as a means of transporting people, entering popular culture when accompanying the touring band of the time. On the other hand, it was used for transportation, also hosting two little elephants in addition to the reproduction of a 15 meters and 1.5 tons centisaur.

Between the curiosity of traffic history there is the 1982 high-end 4×4 version in use in the Sahara, or the Cosworth V8-powered Supervan series, not forgetting the 1985 episode in which a 3,000-meter-high traffic remained submerged by 5 meters of snow and was recovered six times. months later, on thawing, with some damage due to the elements, but perfectly capable of restarting.

It's called a hybrid plug-in but an electric rex

Starting early in 2020, between February and March, they will debut Transit and Tourneo Custom PHEVPlug-in hybrid versions that are part of Ford's electrification strategy: 17 electrified vehicles by 2024 (50% of range by 2022).

For the avoidance of doubt, for those still confused, with Traffic mean transport vehicle while with Tourneo the version dedicated to passengerIt remains that the flat shape remains the same as the technical characteristics.

Ford defines Transit Custom and Tourneo Custom as plug-in hybrids, but technically the power train of this model is more similar to an electric car (92.9 kW and 355 Nm) with range extender (REx). . Traction is always electric and the combustion engine, the 100 hp EcoBoost 1.0, takes care of 13.6 kWh battery which in itself promises 56/53 kilometers of zero emission range. Using gasoline as a generator and burning the entire tank, along with the initial battery charge, the range of 500 kilometers is achieved.

Ford Transit and Tourneo Custom recharge via wallbox 2.7 hours or 4.3 hours with the 10 A and 230 V household cable (2.3 kW) with the household outlet. On the go, four modes are available:

L mode can be activated to maximize energy recovery from deceleration and braking, allowing a guide very close to that of a pedal.

Ford Transit Custom Plug-In Hybrid represents the imminent next step in the development of US PHEV technology. Announced at the latest Go Further, the event anticipating Oval news, the commercial vehicle promises 50 kilometers of electricity, unfortunately declared according to the NEDC cycle.

But the number of autonomy is not the focal point of the experimentation project that arrived in Cologne after London and Valencia, but the application of technologies known in the technological world, the Blockchain made famous by Bitcoin and cryptographic currencies in general and geofencing. often seen in satellite alarms for the study of electric mobility.

Ford's idea is simple: Through five municipal fleets and in collaboration with the institutions (the city of Cologne), 9 Transit Custom PHEV and Tourneo Custom PHEV will be tested in real-life situations, tracing routes to maximize kilometers to zero. emissions traveled.

Blockchain takes care of tracking paths through chronological and permanent records and joins geofencing, creating a virtual boundary based on GPS data. Combining the two technologies and connecting the vehicle to the network (via FordPass Connect, an accessory already available in passenger cars and recently introduced in commercial vehicles), Ford seeks to automate the use of electricity in city-defined emission control areas (ULEZ). ).

This allows not only to control emissions in centers or areas ensuring access to those who can also travel electrically in compliance with zero emissions, but also to change zones and times, eliminating the risk for drivers of missing a warning sign or not knowing the specific laws for that city / time.

Imagining this system applied to all cars, for example, even our Milan Area C and B could benefit from this technology, letting drivers know in real time if their car can enter the restricted traffic area.

The experiment will not only adapt car use to zero emission areas, but data collected from similar initiatives are already part of a larger route mapping project to establish the best locations for charging station installation. . Finally, note that already by spring 2020 the fencing module will be available (without Blockchain) for custom traffic PHEV (new or already registered) which can automatically switch to EV Now mode (electric only) at the entrance of a low emission zone.