Civitanova, acid against the first, then stabbed her. "He ruined me: I have to kill her"

Civitanova Marche, November 18, 2018 – Before the muriatic acid in the face then stab the abdomen and back. He wanted to heal and kill the first, and if the thirty-year-old Romanian attacked in the center of Civitanova yesterday afternoon, she is still alive with the courage of the owner of the restaurant where she took refuge. To save his life, Riccardo Scoponi, owner of Tuna and Salmone, managed to dodge a knife because the blow that was destined to him He punched a sleeve from his leather jacket. Together with the cooks in his kitchen, he blocked and disarmed the 33-year-old Macedonian author from the ambush, immediately arrested by the police. For him, who confessed in the police station, the accusation is of attempted aggravated murder.

READ ALSO Civitanova Marche, pull acid for a woman and stab her

After the arrival of the patrol, the agents found him in front of the place, watched by the boys who immobilized him. He did not try to run away and said, "Call the police, I want to deliver." Among those present, someone heard him say: "It ruined me, I have to kill her". He did not resist when the police put him on the wheel, a jacket on his head to cover his face, while among the people gathered in the street – a hundred people – there were those who shouted insults against the Macedonians. 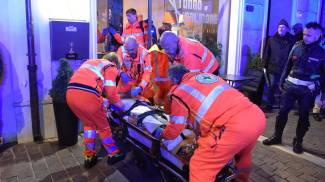 Out of tension, inside the restaurant the 118 doctors were rescuing the woman, at 7:30 pm in the Green Cross ambulance to the hospital where she underwent emergency surgery in the abdomen. The acid has come in one eye, but it does not risk losing it. Under shock the city. The ambush occurred at 18:40, on the pedestrian ramp of the underground passage connecting Corso Vittorio Emanuele to Via Indipendenza. There the Macedonian surprised the woman and threw muriatic acid at her, contained in a plastic package, from the few cents found in any home-made product store.

Luckily he did not reach her in the face, if not in a stain. WIn the red jacket soaked in that liquid, the girl ran away running towards the square, and took refuge in the neighboring restaurant Tonno and Salmone. The waitress asked for a glass of water and if she could use the bathroom. He went to the bathroom and immediately after he entered. Through the testimony, he would have taken a knife with a long blade about ten inches from his pocket and went to the bathroom, where he stabbed the girl.

Two blows hit, on the back near the neck and, what is already dangerous in the abdomen. If he could not kill her, it was because the owner came up to him and tied it behind him, dragging him out and immobilizing him with the help of the kitchen staff. "I do not want to say anything, because now they're talking about cops and saviors. You know everything about how it was, "were the only words spoken by Scoponi as he showed the hole caused by the dagger in the jacket. Also on site were the police chief of Macerata, Antonio Pignataro to personally follow the serious violence and then went to the hospital. The Macedonian lives in Civitanova and would be irregular in Italy. The girl works in a nightclub in the city. They knew each other and there would be a story between them. The Macedonian interrogation will clarify the causes of the ambush, probably jealousy.