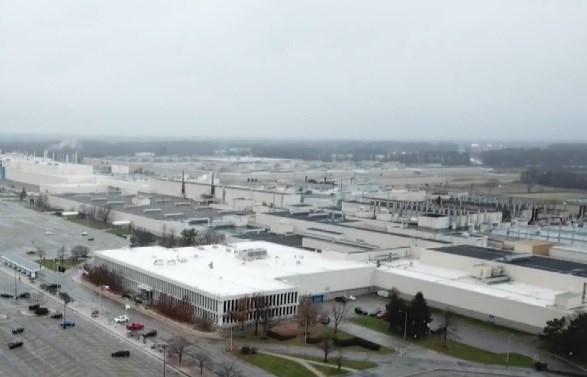 
The United Autoworkers union says it wants General Motors to maintain the Lordstown assembly plant and make a new product there.

UAW Vice President Terry Dittes issued a statement on Wednesday in response to the news that GM is working to sell the Lordstown operation to an Ohio company that wants to make electric trucks in the country.

In his statement, Dittes called the union's position "unequivocal," stating that GM should designate a product for Lordstown and continue operating it.

Following a tweet from President Trump, General Motors announced on Wednesday that it is in discussions with Workhorse Group Inc. and a new affiliate to sell the company's Lordstown Complex.

According to a statement from GM, the move has the potential to bring production and assembly work of electric vehicles to the factory.

Following the final agreement, the entity, led by Workhorse founder Steve Burns, would acquire the facility. Workhorse would have a minority stake in the new entity, according to GM.

"This potential agreement creates a positive outcome for all parties involved and will help solidify leadership of the Workhorse's role in the EV community," said Workhorse CEO Duane Hughes.

Burns added, "The first vehicle we plan to build if we buy the Lordstown Complex would be a commercial electric pickup, combining Workhorse technology with the manufacturing experience of Lordstown."

"We remain committed to growing industrial jobs in the US, including Ohio, and we see this development as a potential win for everyone," said Mary Barra, president and CEO of GM. "Workhorse has innovative technologies that can help preserve the tradition of more than 50 years of assembly work for Lordstown vehicles."

Since last November, GM says it is in discussions with the UAW about the impact of changes in market conditions at the Lordstown facility. These discussions are being expanded to address this opportunity, according to GM.

In its response, the union says a federal lawsuit filed by the union over the closure of the Lordstown, Baltimore and Warren facilities is still pending, and the UAW will continue its effort to protect the contractual rights of its members there.

Dittes says the UAW and GM will discuss the future of Lordstown during the national negotiations that will begin in July of this year.

"We will monitor this situation as it develops to determine which course of action will most benefit workers represented by the UAW at General Motors," says Dittes.

In addition to the Lordstown announcement, GM also announced that it is creating 450 new manufacturing jobs in Ohio at its Toledo, Moraine and Parma facilities.

Senator Sean O Brien told 21 News that Workhorse plans to hire 400 workers who will be members of the UAW, according to O & # 39; Brien.

Local 1112 UAW president David Green, who in the past said the union was not interested in sending GM to sell the plant to a new owner, had no comment on the news.

According to its website, Workhorse currently designs and produces battery power trains at its 50,000-square-foot facility in Loveland, Ohio.

The Workhorse Group Incorporated was created in 2015 from the old AMP Electric Vehicles, established in 2007 as a company to develop electric vehicles.

According to Workhorse's website, the 100% GM Sky mass production was the only mass-produced electric vehicle in a national "clean production" competition held in 2010.

The company says its work on the Sky Roadster has led to the creation of electrification packages for the Chevrolet Equinox SUV, the Jeep Grand Cherokee and the Mercedes Benz ML350.

AMP Electric Vehicles opened the capital in 2010, trading in the over-the-counter market.

When the economic benefits of conversion became less certain, the company says it has moved away from passenger cars and has begun to focus on electrifying commercial vehicles. This led to a development agreement with Navistar, one of the top US truck manufacturers. Under the development contract, the initial project was to re-energize a delivery van of 1,000 cubic feet.

The first vehicle was delivered to Navistar in August 2012 and successfully passed the requirements and performance test, according to AMP.

AMP says Navistar's top management has changed at the same time and Navistar has submitted the electrification project. However, an electric battery-powered test truck successfully passed a 4,000-mile durability test, according to AMP.

The company says the acquisition allows the company to produce new chassis for mid-size trucks.