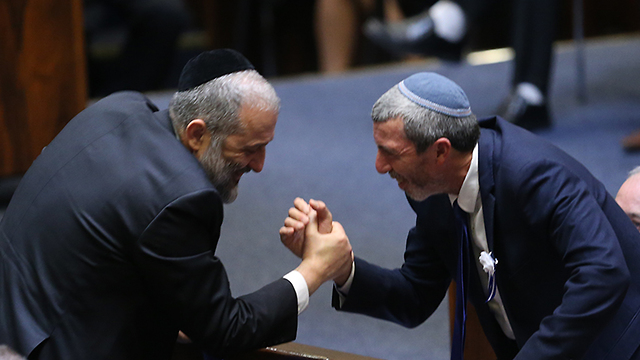 Since the results of the Israeli election were announced, we hear without ceasing the "will of the people." Any ridiculous idea proposed by the extreme right and ultra-Orthodox parties is met with the same response – the people have decided.

This notion, however, is incorrect. The people did not vote to accept a list of demands made by the Agudat Israel or Shas parties. While it is true that the right-wing and ultra-Orthodox bloc won about 56.22 percent of the total votes (including the parties that have not crossed the threshold), this does not mean that the people have decided against a new FDI, intended to draft the ultra-Orthodox for the military.

In the existing coalition system, too much power is given to small parties that barely pass the electoral threshold, and after the April 9 vote, the number of such parties has grown significantly. The small parties in Israel are not concerned with preserving a stable political environment and their integrity. These parties have an agenda and they do not care what the general public wants.

Small parties have the power to impose their will, even if it means going against popular opinion on certain issues. A unity government (even if led by the right) would have reflected the will of the public far better than a right-wing and ultra-Orthodox coalition. Unfortunately, this will not happen even if most prefer it.

Stock Photo: MKs Yaakov Litzman and Aryeh Deri; "People have not decided against a bill for the ultra-Orthodox & # 39; & # 39; (Photo: Ohad Zwigenberg, Avi Mualim)

The sad truth is that having a consensus within the coalition on certain issues does not make it a popular opinion among the general public. This is the fault in the system. Former center-left (as well as right-wing) coalitions were also forced to yield to the extortion of small coalition partners, threatening to cause a government collapse. So people are not the ones who decide. It is the minority that does and imposes on all the others.

This issue becomes much more serious when a ruling party proposes to restore legislation granting parliamentary immunity to Knesset members in order to protect their leader from future prosecution. That kind of proposal, which would make the Knesset a safe haven for criminals – has nothing to do with the will of the people.

Not only did people not decide to exempt Netanyahu from an accusation. Election candidates themselves said they would not support offers that would make the Knesset a sanctuary for criminals.

Netanyahu said, just one day before the election, that "there will be no immunity law" in his interview to channel 13 news. Knesset president Yuli Edelstein and MK Gideon Saar, both members of the Likud party, also said they would not support laws that would propose immunity. It is true that the promises made during election campaigns are often quickly broken, for a million excuses. However, one thing should be clear: people do not decide on immunity – not for the prime minister or for others.

I must confess. I've been writing against the judges' government for years, the rule that's supposed to be there to save us from dangerous politicians. History shows that when these politicians come to power, no court can save the public from them. And, in many cases, politicians are much more enlightened individuals than judges.

But will we be seeing dangerous legislation in the future of the Knesset? Let's hope not. But if we do, we must remember that it will not be because the people have decided. It is because dangerous politicians have decided to trample the will of the majority.